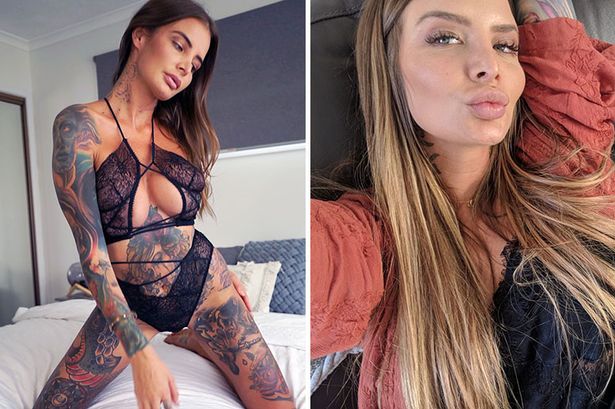 A former sex worker in Australia, Evelyn Miller, who got really popular for having two vaginas says she used one for work and one for romance.

Miller revealed that having two vaginas allowed her to separate her sex work from her romantic life.

According to the 30-year-old, she discovered the anomaly when she had uterus didelphys at the age of 20.

Uterus didelphys is a rare abnormality that results in one having two vaginas, cervixes and uteruses.

This also means she has to use two tampons as she has simultaneous periods.

The former escort worked in the sex industry for eight years and says her extra vagina was useful for endurance reasons and to separate work from her personal life.

Evelyn, of Gold Coast, Australia, shared her experience with the DailyStar UK.

“To me it’s my normal and I never really thought it was that intriguing, but apparently it’s very intriguing.”

“I guess not many people can say that they use one vagina for work and one for personal life. It was helpful with work to be able to have a whole other vagina.

“It was handy for endurance – if I had a lot of bookings and I was getting uncomfortable in one, I could just use the other one.

“It’s tough being in a relationship with an escort for all sorts of reasons and you especially don’t want your sex life compromised at home – it really enabled me to have that separation.

“When I got into a relationship it was better for me to separate the two.”

Evelyn claims her condition leaves clients ‘mind blown’ and that a gynaecologist once turned their session into a medical exam.

“Some clients I will tell and they don’t believe me at first until I show them and then they’re completely mind blown.

“They ask to try it out, look at it and put their fingers in it.

“I have a million questions – there’s so many questions already with sex work, so together it adds a lot more intrigue.”

Evelyn claims her uteruses are half the size and a different shape to a regular one and that she was told she may have difficulty conceiving.

But, she is now six months pregnant with a baby boy in her right uterus.

“Not knowing if I’d be able to have kids, and that being pregnant is quite high risk, was really daunting.

“I actually fell pregnant during a foursome – we were filming with two of my girlfriends and my partner.

“I sent them a text the day I found out and they think they’re lucky charms.”

“I could carry babies in each one but they wouldn’t be the same age.”