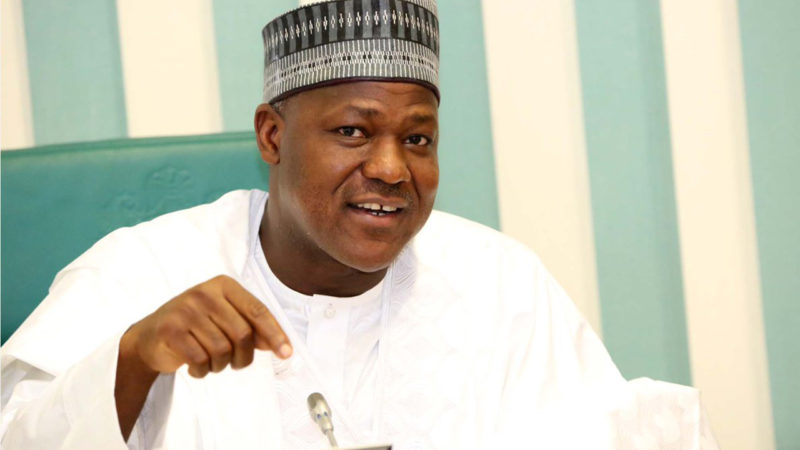 The immediate past Speaker of the House of Representatives, Yakubu Dogara, has threatened legal actions against a Bauchi-based online news blog over a publication that he described as distasteful and libellous.
According to Tribune, Dogara who is now the member Representing Bogoro/Dass/Tafawa Balewa Federal Constituency of Bauchi State, gave the news blog a 72-hour ultimatum till July 2, 2021 to retract the publication as well as a writted apology or risk legal action.

The letter was addressed and delivered to Publishers of the online news medium by Barristers Ahmed A. Accanny and S. N. Yusuf, from Baushe Bauchi-based Chambers in reference to the story by the online blog (name witheld), alleging that Dogara “connived” with the Universal Basic Education Commission (UBEC) to squandered a sum of N1 billion meant for renovation of schools in his Federal Constituency.

“Your disingenuous publication purported to elicit information from some named persons one of whom is one Mr. Gideon Gambo, whom your spurious publication claim is an uncle to our client and NUT Chairman of Bogoro Local Government,” the statement read, adding that it indictied one Mr. Gideon Gambo, who was identified as a fictitious uncle Dogara and accomplist to the alleged embezzlement.

It continued, “It is very glaring that nowhere in your ignoble publication other than the sensational headline did you trace the release of the sum of N1 billion to UBEC for the construction of model schools which UBEC undertakes at N250 million and have constructed same in many states across the country.

“Since you have categorically failed to state whether the purported sum of N1 billion was released and to whom, how therefore did you arrive at the conclusion that our client in conjunction with UBEC has squandered a nonexistent sum of N1 billion? It is crystal clear that you have left no intelligent person in doubt as to the fact that your mendacious publication was just meant to defame our client.

“…As though the foregoing was not enough, you went on to personally state that the proposed ICT centre in the community has been converted to an APC warehouse used by Dogara. The building which has an APC logo, the political party of Dogara, is behind his house.

“Our client finds it shocking that you went to great lengths to starkly defame him without a shred of evidence and had to resort to base conjecture and suppositions. In sharp contrast to what your unfounded publication would have the world believe, our client has no uncle dead or alive that bears the name Mr. Gideon Gambo in which by virtue of your publication is the acclaimed principal of Gwarangah Secondary School and chairman of NUT, Bogoro L.G.A.

“One of such examples is your unfounded claim that members of the community told your medium that the books meant to be distributed to the schools in the area have been stashed inside Dogara’s house as well. It may interest you to know that our client is not aware of the release of the sum of N1 billion to any entity by UBEC for the construction of schools in his constituency.

“It is also noteworthy that contrary to the letters of your defamatory publication, no project was ever listed in the budget for Junior Secondary School in Gwarangah.

“Our client is baffled by the fact that you opted to feign ignorance of the fact that the responsibility of fixing and rehabilitating schools lies with the state government and not on our client who as a legislator merely but concertedly nominates the schools where the projects will be carried out.”

“The grossly unfounded claim that books meant for school children are stashed in our client’s house at Gwarangah and that the ICT centre at Gwarangah bears the APC logo are not only fantastic lies but seem like a carefully crafted scene of a fictitious movie. Our client is equally marveled and mortified by your publication’s insinuations that he works for UBEC and superintends over their projects all in a bid to defame him.

“You are therefore and hereby given 3 days from the date of service of this letter on you, to retract your defamatory publication against our client and unequivocally apologize for same through the same medium you used, failing which we shall proceed to seek legal redress against you before a competent court of law in the course of which we shall claim substantial damages against you.”

Related Topics:Yakubu Dogara
Up Next