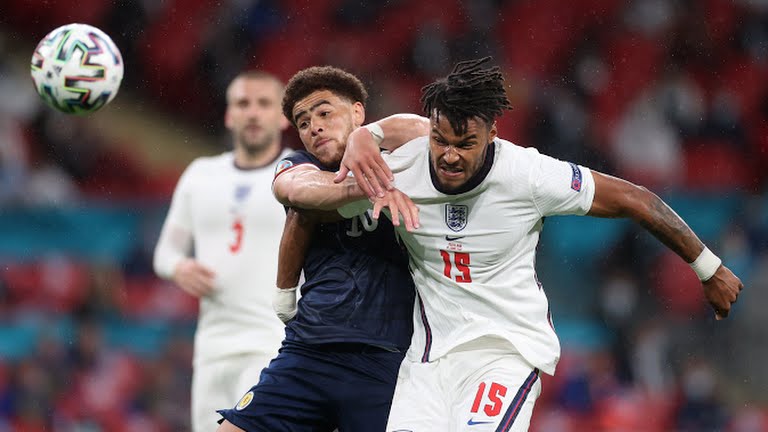 Scotland stalled England’s qualification to the knockout phase of the EURO 2020 after a frustrating goalless draw at the Wembley Stadium on Friday night.

The draw which is both team’s fourth in their 115th meeting in all competitions opened up the last 16 qualification ticket in Group D with the Czech Republic and England favourites to qualify if the last group matches end in a stalemate in both encounters.

Both teams had good opportunities to break the deadlock in the first half but Manchester City’s John Stones was denied by the woodwork from a corner just as Motherwell’s Stephen O’Donnell forced a decent save from Everton’s Jordan Pickford.

Regardless of the changes, England were limited to just a shot on target.

The much-anticipated introduction of Aston Villa’s Jack Grealish failed to impact the game as expected by Gareth Southgate and the English fanbase with the Scots registering two shots on target.

Scotland came close to scoring again in the 78th-minute when Andy Robertson found Che Adams at the far post but the Southampton star sent his volley wide, ensuring the game remained goalless until the final whistle.

England would require at least a draw against Czech Republic in their final group game to enter the next round while Scotland must defeat Croatia to stand a chance of making it into the last 16 after their opening game defeat to Czech.

Related Topics:EnglandEuro 2020Scotland
Up Next