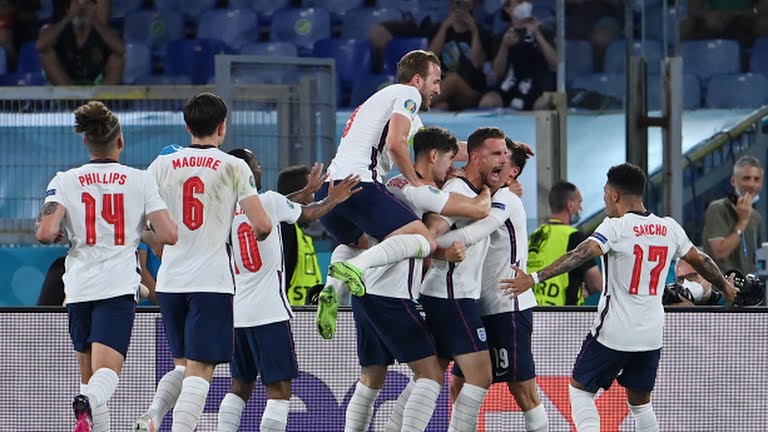 England captain, Harry Kane, scored twice as England beat Ukraine 4-0 in the EURO 2020 quarterfinal at the Stadio Olimpico Stadium to enter the semifinal of the tournament.
Gareth Southgate’s men avoided an upset on Saturday to extended their clean sheet to five games without conceding a single goal in the tournament.

Tottenham’s Kane gave the English team an early lead four minutes into the first half after an assist from Raheem Sterling as they ended the first half 1-0 with Ukraine looking to get back into the game.

The Three Lions came back roaring in the second half and ran riot by scoring three more goals in the space of seventeen minutes to book their spot in the last four of the competition.

Manchester United captain, Harry Maguire, scored the second goal with a powerful header one minute into the second half after an assist form teammate Luke Shaw who then set up Kane for another header four minutes later to make it 3-0.

Liverpool captain, Jordan Henderson, rounded up the scoring in the 63rd minute by netting a free header from a Mason Mount corner kick.

England travel back home to Wembley where they would face Denmark for a place in the semifinal as they hope to win the European tournament for the first time in their history.