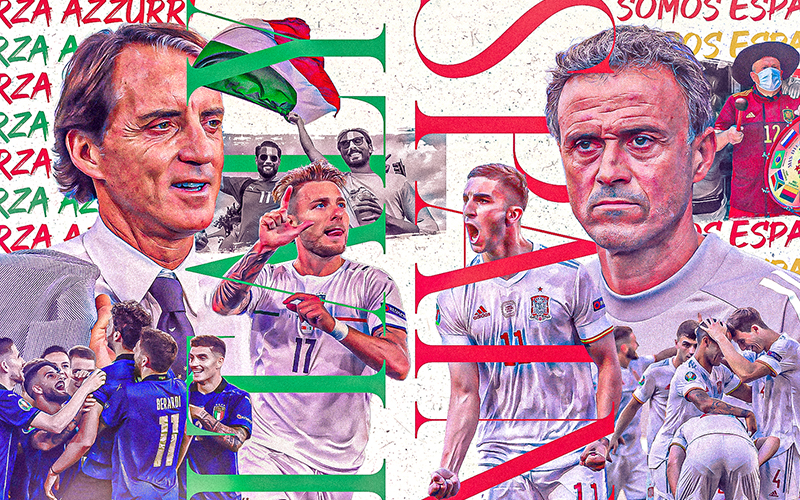 Italy and Spain meet in a blockbuster first semi-final at Euro 2020 before an expected crowd of 60,000 at Wembley on Tuesday as anticipation builds ahead of host nation England’s last-four tie against Denmark.
Tuesday’s game is the latest episode in a burgeoning rivalry between Italy and Spain with the nations meeting in a fourth consecutive European Championship.

Spain won on penalties in the quarter-finals in Vienna in 2008 on their way to winning the trophy and then thrashed Italy 4-0 in the final in Kiev four years later.

Italy gained a measure of revenge by winning 2-0 in the last 16 at Euro 2016 and the Azzurri appear the favourites this time as they arrive at Wembley having knocked out Belgium in the quarter-finals to stretch their unbeaten run to a remarkable 32 games.

“We know that if we play the way we have in the last 30 matches or so then we can come away with a good result,” said Italy’s defensive stalwart Leonardo Bonucci on Monday.

While Italy – whose only European Championship title came in 1968 — have been the standout team at the tournament so far, Spain have overcome a difficult start to reach the last four as they target a record fourth continental crown.

Luis Enrique’s team beat Croatia 5-3 in extra time in the first knockout round before edging Switzerland on penalties in the last eight.

“We simply need to be motivated by the fact we are coming up against such a great and prestigious side in such a wonderful arena as Wembley, in the knowledge that we could be involved in the final in just a few days time,” added Bonucci.

Both Italy coach Roberto Mancini and his Spanish counterpart expressed regret that fans of the two semi-finalists will not be able to travel to attend the game in London.

– Lack of travelling fans ‘unfair’ -More than 60,000 spectators will be allowed inside the 90,000-capacity Wembley after the British government eased the coronavirus restrictions that have been in place during the tournament.

However, supporters have not been permitted to travel from either country just for the match, something which has been a common occurrence at this pandemic-affected tournament.

“It is a strange situation. I hope that there are Spanish and Italians more than English fans, but they are things we cannot control,” said Luis Enrique on Monday.

“I am not going to waste any energy on it. We wish it was different but we accept it.”

Italy and Spain both enjoyed the support of their own fans when playing group games at home, in Rome and Seville respectively, and Mancini called the situation in London “unfair”.

Italy are without stricken full-back Leonardo Spinazzola, who on Monday underwent surgery on the torn Achilles tendon he suffered against Belgium in Munich.

– ‘More belief’ in England -Whoever emerges victorious from Tuesday’s showdown will await the winner of Wednesday’s second semi-final between England and Denmark.

Gareth Southgate’s England side have raised the hopes and expectations of the host nation with their displays so far, making it to the last four without even conceding a goal.

They are dreaming of reaching a first major tournament final since winning the World Cup at Wembley in 1966.

England do not have happy memories of recent semi-final appearances, including most notably losing at that stage to Croatia in Moscow in the 2018 World Cup.

“We’ll probably have a little bit more belief going into the Denmark game than what we did in the Croatia game,” Manchester United captain Harry Maguire said on Monday.

“We hadn’t been to a semi-final in so long as a country, so the belief wasn’t there. I’m sure the fans are believing more now.”

Denmark have themselves enjoyed a remarkable run at this Euro since the trauma of Christian Eriksen’s cardiac arrest in their opening defeat against Finland in Copenhagen.

“We have incredible support in England and we were their preferred second team but now we are their enemies,” Danish defender Andreas Christensen, who plays club football for Chelsea, told local media.