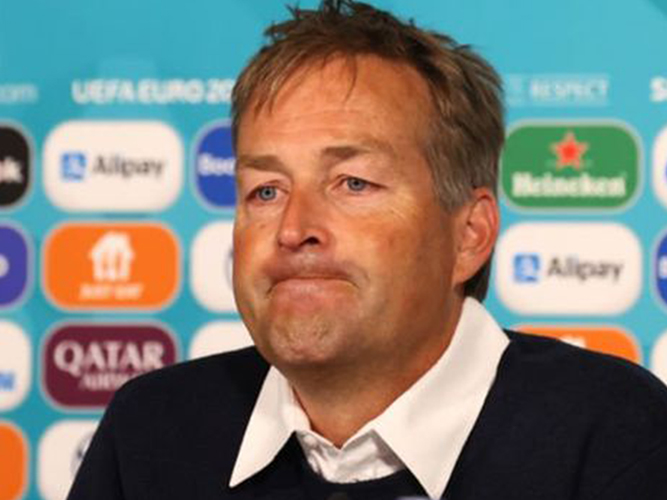 Denmark head coach, Kasper Hjulmand, has congratulated his English counterpart, Gareth Southgate, after Wednesday night’s victory over the Danes in the Euro 2020 semi-final.

Simon Kjaer’s own goal cancelled Mikkel Damsgaard’s brilliant free-kick before Harry Kane scored the winner in extra time (2-1) via a rebound penalty that was initially saved by Kasper Schmeichel.

UK Metro reports that the Englishman has now guided England to their first final in a major tournament since 1966 as the Three Lions prepare to face Italy on Sunday at Wembley.

Although England was awarded a controversial penalty after Raheem Sterling fell with little contact in the Danes’ box, Hjulmand surprisingly heaped praises on Southgate in his post-match press conference.

“First of all I want to congratulate my colleague Gareth,” said Hjulmand.

“I’ve followed what the FA has done strategically and especially how Gareth has led this team for a number of years now.

“How he works with the young players, how he gets involved and how he behaves himself with the values he has and how he represents and communicates is outstanding.

“So congratulations, Gareth. I think you are doing a great job in a difficult job.”

On the controversial penalty, Hjulmand said “It was a penalty which should not have been a penalty. It is something which annoys me right now. We are very disappointed,’ said Hjulmand.

“You cannot pass by the ball on the pitch which has so much influence on the game.

“I know it sounds weird right now but I cannot help having these feelings. One thing is to lose a game, it happens, but losing this way is disappointing because these guys have fought a lot.

“It feels bitter but we have to digest this before we can discuss these feelings. It’s a bitter way to leave the tournament.

“The way we lost makes it harder to understand why we lost. I have to be careful with what I say. We have an amazing group and we definitely can do something great again.

“Maybe it is easier for me to say how I feel in a few days.”