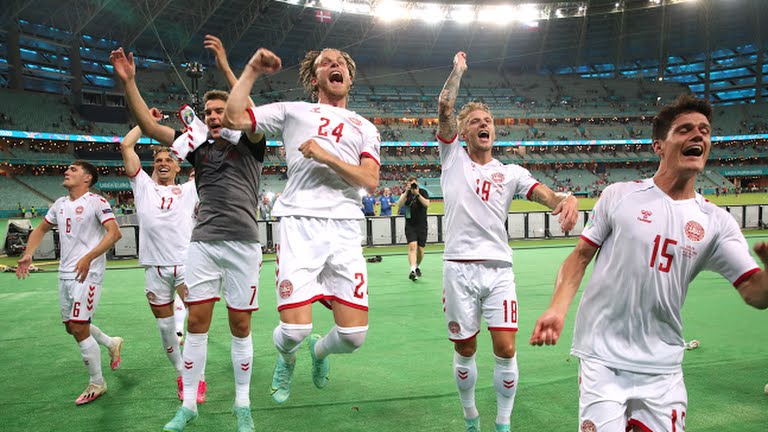 Denmark secured a 2-1 victory over the Czech Republic at the Baku Olympic Stadium to progress into the semifinals of the EURO 2020 championship on Saturday.

Czech Republic boss Jaroslav Silhavy made one change to his team from their 2-0 win over Belgium; left-back Boril returns from suspension, replacing Kaderabek in the starting line-up while Soucek retained the captain band as captain with Darida not yet fit enough to start.

The Danes remained unchanged from their victory over Wales; Dolberg and Stryger Larsen kept their places as Poulsen and Wass returned to the bench.

Denmark’s have clearly moved on from their opening defeats to Finland and the Netherlands, as well as the loss of Inter Milan’s Christian Eriksen, who suffered a cardiac arrest and is recovering at home with his family.

Coming from a 4-1 victory over Wales, Thomas Delaney gave Denmark the lead five minutes into the match before Kasper Dolberg doubled the advantage for the Danes three minutes to the break.

Patrik Schick halved the deficit for Silhavy’s side two minutes after the break but the Danes held on to finish the match 2-1, booking their place in the semifinal.

According to Google tracker, Denmark have won three consecutive games at the European Championships for the very first time, and only the second time at any major competition (World Cup/EUROs), having previously done so at the 1986 World Cup.

Denmark will feature in the semi-final of a major competition (World Cup/EUROs) for a fourth time, with each occasion coming at the European Championships (also 1964, 1984, 1992). Indeed, their 29-year gap between European Championship semi-finals (1992 to 2021) is the longest ever by a single nation in the competition, surpassing England’s 28-year wait from 1968 to 1996.

They await the winner of the final quarter-final between England and Ukraine at the Stadio Olimpico Stadium in Rome later tonight.