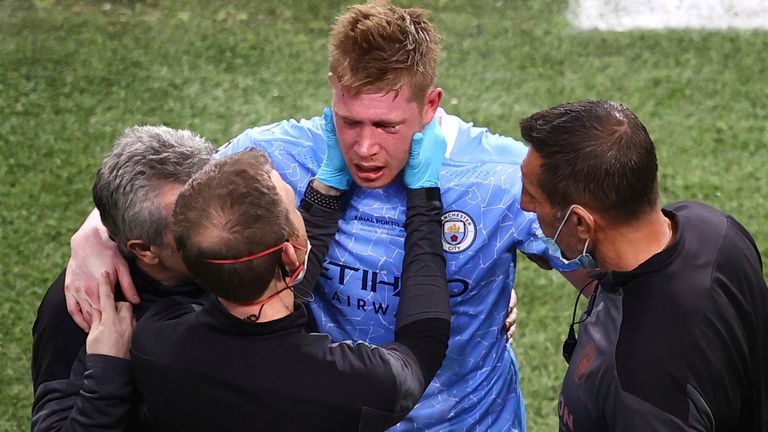 Manchester City midfielder, Kevin De Bruyne, on Monday was added to Belgium’s squad for this month’s EURO 2020 championship after undergoing “a small operation” on his face on Saturday morning.

De Bruyne suffered fractures to his nose and left eye socket following a collision with Chelsea’s Antonio Rudiger in the Champions League final on May 29.

Speaking to reporters at Belgium’s team base near Brussels, Red Devils coach, Roberto Martinez revealed that the former Chelsea star remains a major doubt for their Euro 2020 opener against Russia.

“Kevin De Bruyne has joined the group and that’s fantastic news. He looks ready, he looks fresh, and just to see him walking into the dining room was a real highlight of the day.

“He joins the medical department now for the next few days and then whenever we get the green light he is going to be integrated into the sporting side,” said the former Everton manager.

“At the moment I am not counting on Kevin to be in the first game but if that changes it will be because he adapts well to his own programme,” he continued, adding that “it is too early to decide” when he will be able to play.

Martinez, according to AFP admitted De Bruyne may struggle to be ready to play against Russia in Saint-Petersburg in Belgium’s first Group B game on Saturday.

Belgium, which travels to Saint-Petersburg on Friday, will also face Denmark in Copenhagen on June 17 and Finland, back in Russia, on June 21.