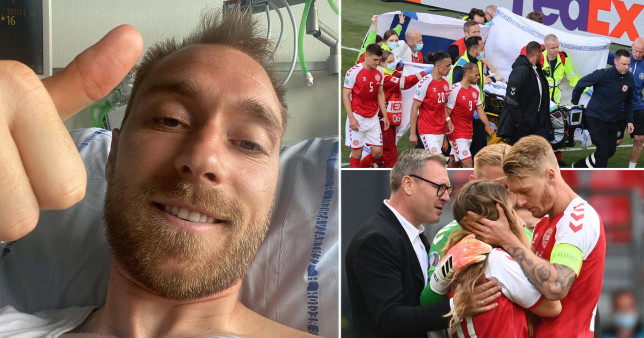 Spurred by a blend of passion and patriotism, Christian Eriksen, has vowed to continue supporting his Denmark teammates at the ongoing EURO 2020 championship.

His renewed call has been viewed by many as a glimpse of hope coming from the heart of a true sportsman.

Tears filled the stadium and hearts were dampened on Saturday, June 12, 2021, when the world watched Eriksen collapse after suffering a cardiac arrest in Denmark’s opening Euro 2020 clash with Finland in Group B encounter at Copenhagen’s Parken Stadium.

It took over 10 minutes of emergency CPR, credits to Denmark captain Simon Kjaer, the team’s medical staff and referee Anthony Taylor (first responders) to get him breathing again before he was transferred to a hospital.

Although Joel Pohjanpalo’s second-half strike secured a 1-0 victory for Finland when the game resumed hours later, Denmark and the rest of the world including the Finish team, were elated when Eriksen spoke to his teammates via FaceTime that same evening.

The player posted a message and thumbs-up photo to his 3.3 million followers on Instagram on Tuesday, which read: “Hello everyone, big thanks for your sweet and amazing greetings and messages from all around the world. It means a lot to me and my family [love heart emoji and praying emoji].

“I’m fine – under the circumstances. I still have to go through some examinations at the hospital, but I feel okay.

“Now, I will cheer on the boys on the Denmark team in the next matches.

“Play for all of Denmark [Denmark flag]. Best Christian.”

How close was he to death?

“We started the resuscitation and we managed to do it,” Boesen said.

“How close were we to losing him? I don’t know, but we got him back after one defib, so that’s quite fast.

“How quickly they reacted was decisive I would say.

“The time from when it happens until he receives help is the most important factor. And that was a short period of time. That was decisive.

“They are now doing a series of tests at the hospital that can maybe give some of the answers him and I are looking for. But he is awake and is answering questions clearly.

“His heart is beating again… the tests that have been done so far look fine. We don’t have an explanation to why it happened.”