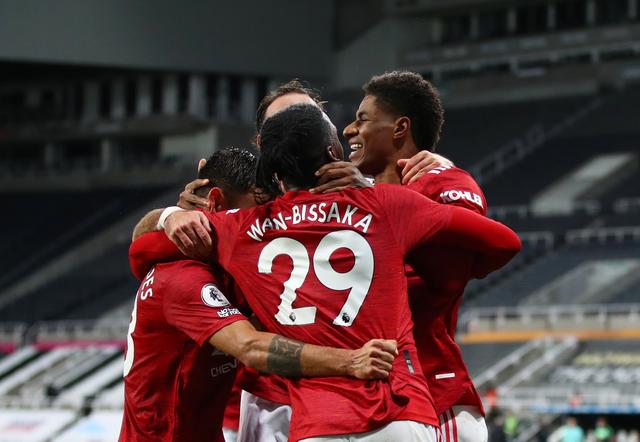 Manchester United captain Harry Maguire repaid his manager’s faith in him by leading the squad to a 4-1 win against Newcastle from a goal down.

United got back to winning ways with a better performance than their 6-1 humiliation at Old Trafford to Jose Mourinho-led Tottenham.

Rashford led the charge in the absence of Anthony Martial who was red-carded against Tottenham and ensured his team did not miss the Frenchman much with two assists and one goal.

The home team took the lead on the night courtesy of an own goal by left-back Luke Shaw very early in the second minuted, leaving him with a bad memory on his 100th game.

Ole Gunnar Solskjaer’s side stayed resilient and pulled one back through a brilliant combo between Bruno Fernandes and Juan Mata but the brilliant finish was ruled out by VAR for offside.

It didn’t take long after the call that United got their much-needed equaliser through captain Maguire who slot in a sweet header from a corner kick in the 23rd minute.

MORE READING!  EPL: James Rodriguez could be back for Southampton clash - Ancelloti

United were handed a chance to go ahead earlier in the second half when Rashford was brought down in the opponent’s half but both teams were left stunned after Fernandes missed his first penalty in over seven for the Reds.

An offside goal and a missed penalty were not enough to stop Fernandes from getting on the scoresheet with a fantastic finish in the 86th minute after a link-up play with Rashford.

Rashford was not quite finished yet as the Englishman linked up against with right-back Aaron Wan-Bissaka four minutes as the latter scored his first-ever goal for United with a thunderous strike in the 90th minute.

With just a few minutes to go in added time, Fernandes repaid the favour by putting Rashford through to help the striker score his much-needed goal of the night as United completed a 4-1 comeback.