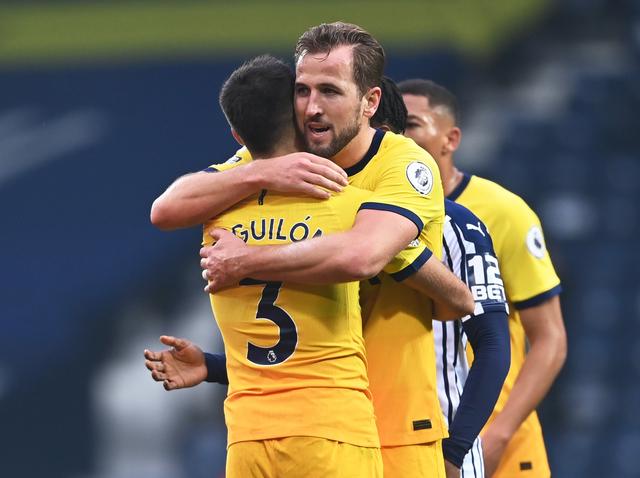 Harry Kane’s 88th-minute header snatched a 1-0 win for a lacklustre Tottenham at West Brom in the Premier League encounter on Sunday.

The win moves Jose Mourinho’s men temporarily to the top of the Premier League with Liverpool and others left to play, Sky Sports reports.

Tottenham were short on creativity for much of the encounter at The Hawthorns, with West Brom the better side in the first half and having six shots to Spurs’ one. [Sky Sports]

Although prolific striker, Son Heung Min has remained without a goal for about two games, Kane’s 150th Premier League goal helped extend their unbeaten run to seven in the league.

Gaffer, Mourinho has however refused to be bothered about the outcome of the games of the potential league toppers, stating that the three points at the Hawthorns is enough.

“We are top of the table but other clubs have a match in hand so let’s see what happens. But honestly, if Liverpool win and Leicester win, it’s not a problem for me at all.

“The important thing was for us to win the three points, three victories in a row in the Premier League for the first time this season and by winning 12 points away, we compensate for the points we dropped at home.

“This match was very difficult. I believe the West Brom boys showed how much they are with Slaven because the way they fought, the way they gave everything to try and get a positive result says everything. I wish them the best and I’m pretty sure playing this way with this commitment and spirit, Slaven will take them from the place [in the table] where they are now.

“Now we go onto the bus and we leave the stadium here top of the league and maybe when we arrived in London, we are third so I don’t think there is any point in getting carried away. I’m very happy with the number of points we have now, I’m very happy that we’re managing away from home to compensate for the points we lost at home in conditions that we shouldn’t so in the end, I’m happy with that.”