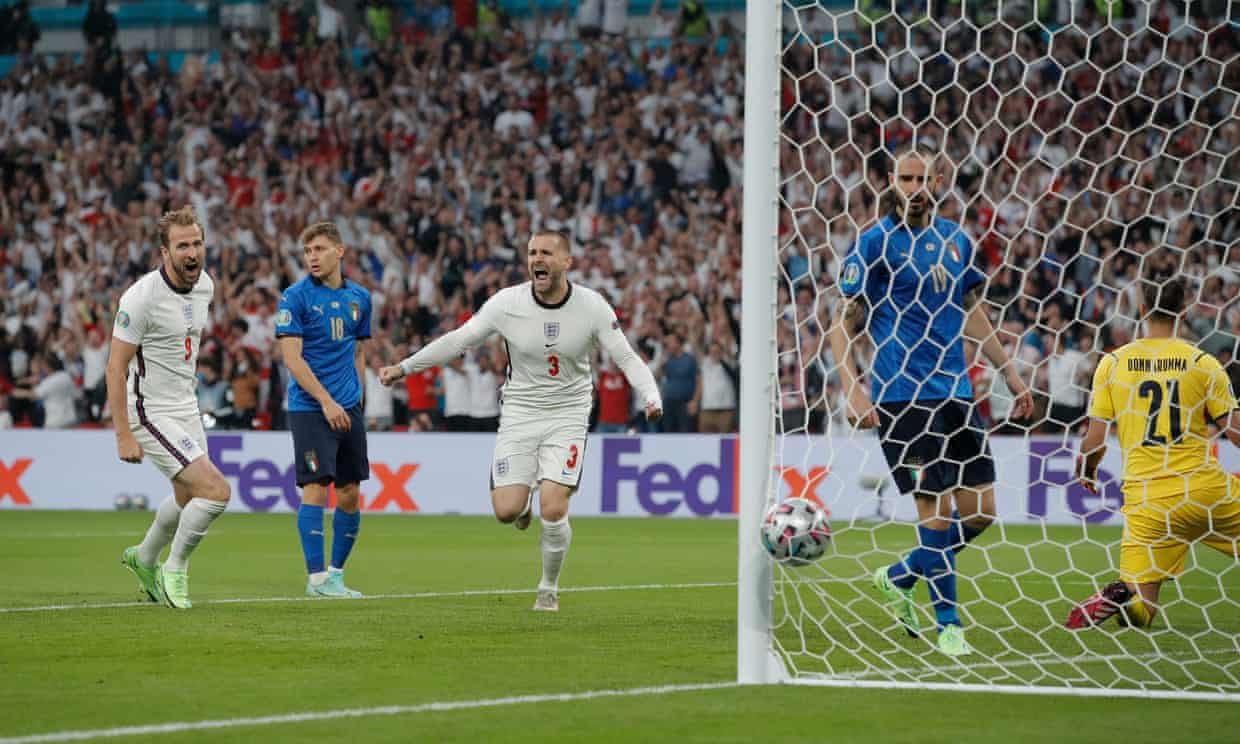 England and Manchester United left-back, Luke Shaw, has scored the fastest-ever goal in a EURO final and the fifth-fastest in tournament history after giving the Three Lions the lead against Italy after a minute and 56 seconds.

The Red Devils defender combined with Atletico Madrid right-back, Kieran Trippier who sent in a cross from the left flank to right, as Shae blasted a first time shot past Donnarumma at his near post to net his first international goal and give England the lead.

Shaw is ranked fifth behind Russia’s Dmitri Kirichenko, Sweden’s Emil Forsberg, Denmark’s Yussf Poulsen and Poland’s Robert Lewandowski on the list of fastest goals in a match other than the final in the torunament’s history.

1:07 – Dmitri Kirichenko (Russia 2-1 Greece, 20/06/2004)
Kirichenko watched from the bench as Russia’s UEFA EURO 2004 hopes vanished with back-to-back defeats, but roared out of the blocks when coach Georgi Yartsev started him for their final Group A outing. The CSKA Moskva striker galloped through after 67 seconds to steer a right-footed effort past Antonios Nikopolidis. It remains the finals’ fastest goal.

1:22 – Emil Forsberg (Sweden 3-2 Poland, 23/06/21)
Sweden knew victory in their final game would give them top spot in a tough group featuring three-time winners Spain. They made a dream start when the Leipzig midfielder, who had scored the winner in their previous match against Slovakia, pounced on a ricochet to drill his finish across Wojciech Szczęsny.

1:39 – Yussuf Poulsen (Denmark 1-2 Belgium, 17/06/2021)
Denmark came steaming out of the blocks in their second game of UEFA EURO 2020 at Parken Stadium, having lost 1-0 to Finland in their Group B opener in Copenhagen five days earlier – a match which had been significantly delayed following a medical emergency involving the hosts’ Christian Eriksen. Cue exuberant celebrations back at the same stadium when Poulsen fired across Thibaut Courtois and into the bottom corner.

1:40 – Robert Lewandowski (Poland 1-1 Portugal (3-5 pens), 30/06/2016)
The Poland striker drew a blank in his first four matches at UEFA EURO 2016, but opened his account just 100 seconds into his country’s quarter-final in Marseille, applying a typically unerring finish to Kamil Grosicki’s pull-back from the left.

1:56 – Luke Shaw (Italy vs England), 11/07/2021
Shaw had never scored for his country before meeting Kieran Trippier’s pinpoint cross from the right with a clinical first-time finish that gave England a dream start to the UEFA EURO 2020 final against Italy. The previous fastest goal in a EURO final had come five minutes and 17 seconds into the 1964 showpiece, Chus Pereda giving Spain an early lead against the Soviet Union.

2:00 – Robbie Brady (France 2-1 Republic of Ireland, 26/06/2016)
The round of 16 game in Lyon was exactly two minutes old when Robbie Brady gave Ireland a shock lead, firing a low penalty off the foot of Hugo Lloris’s left-hand post.

2:07 – Sergei Aleinikov (England 1-3 Soviet Union, 18/06/1988)
Glenn Hoddle was easily dispossessed early on, and Aleinikov surged through the middle and turned sharply before finishing past Chris Woods, as the USSR got the win they needed to reach the semi-finals.

2:14 – Alan Shearer (Germany 1-1 England (6-5 pens), 26/06/1996)
This blockbuster semi-final began with a bang; Paul Ince had already had a rasping volley athletically turned over by Andreas Köpke when the keeper was beaten, Shearer swooping to register his fifth goal of the tournament after Tony Adams had flicked on Paul Gascoigne’s corner.

EURO 2020 Final: Police sweep in as fans attempt to break into Wembley