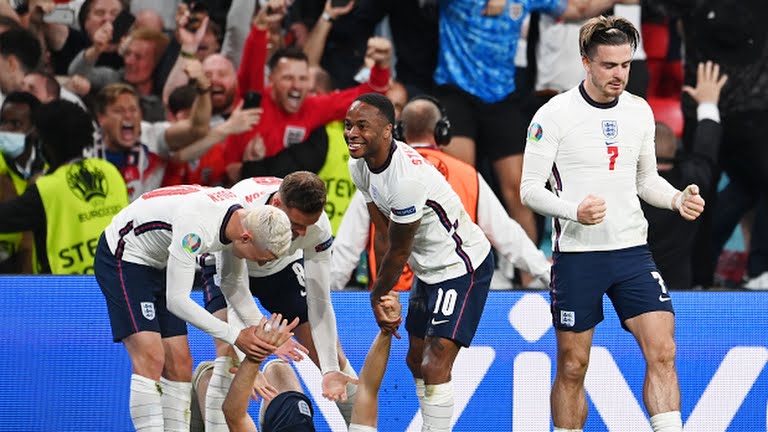 Captain Harry Kane has sent hosts England into the final of the 2020 European Championship tournament after securing a 2-1 comeback win over Denmark in extra-time at Wembley Stadium on Wednesday night.

Arsenal’s Bukayo Saka returned to the line-up in place of Old Trafford-bound Jadon Sancho after an ankle injury kept him out of the 4-0 win over Ukraine in the quarter-final while Denmark remains unchanged from their win over the Czech Republic.

England which has kept a clean sheet through the entire campaign conceded their first goal of the tournament in front of their home crowd when Mikkel Damsgaard gave Kasper Hjulmand’s side the all-important lead with a sublime freekick in the 30th minute, beating Jordan Pickford.

With both sides inseparable after the first half, questions were asked of both goalkeepers after the break; Pickford denied Kasper Dolberg a goal-bound strike from 20 yards while Kasper Schmeichel equally denied Harry Maguire’s header, forcing the game into extra time.

England pushed further afterwards, attempting to avoid a penalty shootout drama but the Danes remained solid until Sterling was awarded a penalty a few minutes before the end of the first extra time.

Skipper Harry Kane stood up to the challenge and sent hearts racing in Wembley after his initial kick was saved by Schmeichel but the Tottenham man found the back of the net with a rebound kick to give England the lead for the first time in the game.

The Danes committed everything towards an equaliser in the second extra-time as Southgate made a tactical substitution by introducing Kieran Trippier for Jack Grealish who only came in some minutes before the end of the second half as they held on for the win.

England enters the European Championship final for the first time and would face Italy on Sunday in the final.