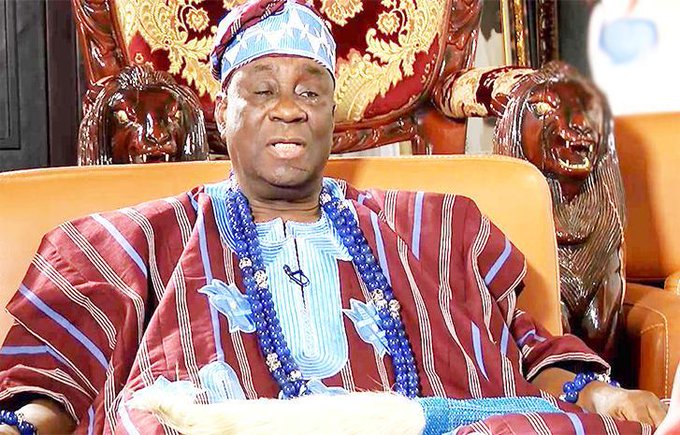 Nigerians on social media have berated the Oba of Lagos, Rilwan Akiolu for alleging that he lost $2 million and N17 million respectively to hoodlums who invaded his palace after the #EndSARS protest was hijacked.

Recall that the monarch’s palace was among the private properties where the COVID-19 palliatives meant for millions of Nigerians to cushion the effects of the pandemic were looted.

Angry youths stormed the Oba’s palace on 21 October 2020, while he was reportedly away and stole the palliatives along with his royal staff, customised shoes and money.

Speaking on Wednesday in Lagos, Oba Akinolu disclosed that he would support anything that can move Lagos forward.

“Many buildings were burnt, including vehicles used to generate income. I can now say publicly that they stole $2 million and N17 million from my palace.

“Those who committed the offence would not have done that if they knew the implication. But as a father, I won’t place any curse on them.

“I have appealed to the Federal Government to assist Lagos with what we have suffered. The incident that happened here from October 20th to 23rd is so saddening.

“The destruction we suffered in Lagos is so enormous compared with other parts of the country,” he said.

Reacting to his statement, Nigerians on the popular microblogging site, Twitter called on the Economic and Financial Crimes Commission to probe Akinolu for money laundering.

According to one user, @heisizumichaels, “Government agencies and different state governors cashed out with this #EndSARS. Now, Oba of Lagos, Rilwan Akiolu claimed that $2million and N17million were stolen by hoodlums.

“But truth be told, it is only a hoodlum that can keep such amount in the house & not in the bank.”

Another user @ImportedAlhaji wrote, “The Oba of Lagos has accused #EndSARS protesters of stealing his $2million and N17million during protest. Please where did he get that money and when is EFCC going to call him up for questioning Or Palace don turn to bank these days? E be like we are mad in this country.”

Popular Twitter doctor, @DrOlufunmilayo also commented saying, “The Oba of Lagos situation alarms me. When the palace was invaded, there was huge palliatives found there – food meant for the poor in society. Now almost N1b cash gone. Is that palace a food warehouse? Or is it a bank? It’s a shame nobody is asking these questions.”

“$2million alone is about 1billion naira. How do you have almost 1billion naira in your house? In a sane country, that man will be in a police station this morning answering questions,” he wrote in another post.

@SledgeAma added, “Oba of Lagos saying #EndSARS hoodlums took 2m dollars and 17 million naira from his house is another reason to make you understand how and why the traditional institute have lost its respect in Nigeria.”

Nollywood star actor, @Gabafolayan also tweeted saying, “But how will the Oba of Lagos have $2 million in his house. To imagine that he just discovered that after how many months. EFCC, where are you?”

Another Twitter user, @akeula_trendy wrote: “The devil that’s supposed to be Oba of Lagos friend has finally pushed him into EFCC’s den. I hope Obas and Emirs Dey get immunity sha. The God of #EndSARS protesters is a wonderful God.”

@iamseunalaofin said that “It’s funny that the Oba of Lagos can say with confidence that 2 million dollars and 17 million Naira were stolen from his house during the #EndSARS revival movement! We won’t stop until we collect our country back from these hoodlums.”

“In saner climes, Oba of Lagos would be investigated for money laundering for saying he lost $2m and N17m during the #EndSARS protests to hoodlums but this is Nigeria,” @ChrisTalker247 wrote.

As ar the time of filing in this report, the bird app has been flooded with about 19.5 thousand tweets from aggrieved Nigerians.

Related Topics:#EndSARSFeaturedhoodlums stole money from Ona of Lagos' Palaceoba of lagosOba of Lagos - Rilwan AkioluRilwan Akiolu vs #EndSARS hoodlums
Up Next

Icons take over Twitter as Laycon hits one million followers