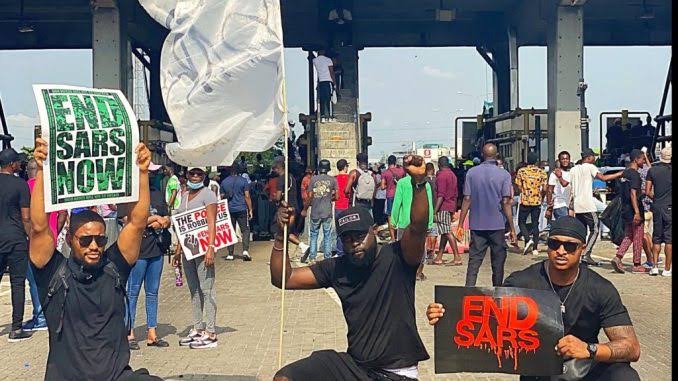 The Nigerian Army had given a graphic narration of the alleged dire security situation in Lagos that warranted them being invited to restore order in the state.

Brig.-Gen. Ahmed Taiwo, Commander of the 81 Division, Military Intelligence Brigade, Victoria Island, Lagos on Saturday told the Lagos Judicial Panel of Inquiry and Restitution for Victims of SARS Related Abuses and Other Matters that the Lagos had descended into a state of total chaos.

Taiwo was testifying before the panel on Saturday about the Army’s alleged role in the shooting of unarmed #EndSARS protesters on Oct. 20 at the Lekki Tollgate.

Taiwo who testified before the panel using a projector had shown graphic images of policemen being lynched, police stations being looted and burnt, as well as citizens resorting to cannibalism by eating the burnt flesh of the corpses of lynched police officers.

“Many of us have lived through the 70s to the 2000s, and one thing I have said is that once a peaceful protest goes beyond three days there are hoodlums waiting in the wings to hijack it and cause mayhem and this was no different.

“This state of affairs continued until Oct. 20 and even I was caught up in one of such mobs. The hoodlums I met are not the #EndSARS protesters we have come to see.

“It is the task of the armed forces to intervene when the security task overwhelms the police and other paramilitary services.

“Mr Babajide Sanwo-Olu asked the army to intervene which was the correct thing to do,” he said.

Playing a video of the siege of the palace of the Oba of Lagos by hoodlums, Taiwo said that the monarch and his family had to be rescued from the chaos by the Nigerian Army.

“Both the Oba and his family were ferried to safety by the Nigerian Army,” Taiwo said as he played a video recording of the monarch and his family being rescued and taken into a military pickup truck.

“The business district areas were looted and offices were ransacked and destroyed. The hoodlums attempted to invade the Government House, but it was repelled.

“They attempted to break into the Ikoyi Prison and it was repelled. The 81 Division had to support the Correctional Services and the Police.

“They also burnt down the Igbosere High Court. The inmates had burnt part of the Ikoyi Prison, they all did this at the same time because they had gotten information about what was happening on the outside.

“They burnt Shoprite and Spar Lekki was looted. What was shocking and saddening to me was that mothers were taking their children to loot,” he said.

The officer said that he had received a distress phone call from the Managing Director of Spar pleading for the military’s assistance.

“The MD was pleading and saying that let them loot the place, but they should not burn it down.

“When we arrived, these looters had the temerity to come up to soldiers while holding looted goods and say come, correct sir!

“A man we arrested had looted household items and when we went to his house to recover the items he had already installed them,” he said.

Taiwo said that while the trying to restore order at Spar Lekki, he had met looters looting Shoprite Lekki and that he had ordered soldiers under his command not to shoot at them, but into the air.

“I wanted to catch them and I did not want any casualty. All the looters our men arrested were taken to the 65 Battalion and we have people of almost every tribe there that day.

“There was a voice note on social media purportedly from Nnamdi Kanu, the leader of the proscribed Indigenous People of Biafra (IPOB) saying Igbos should cause mayhem in Lagos.

“This could not be further from the truth because from my assertion, most of the businesses affected were owned by Igbos,” Taiwo said.

The Nigerian Army told the panel that financial institutions were the most targeted by looters during the #EndSARS unrest and that the army had evacuated about N2billion in two days for banks during the chaos.

He said the Chief of Army Staff (COAS) Lt. -Gen. Tukur Buratai had ordered that the captured looters should be treated humanely by the military.

“They were fed three times a day and were given what the soldiers were eating. Some of them did not even want to leave,” he said.