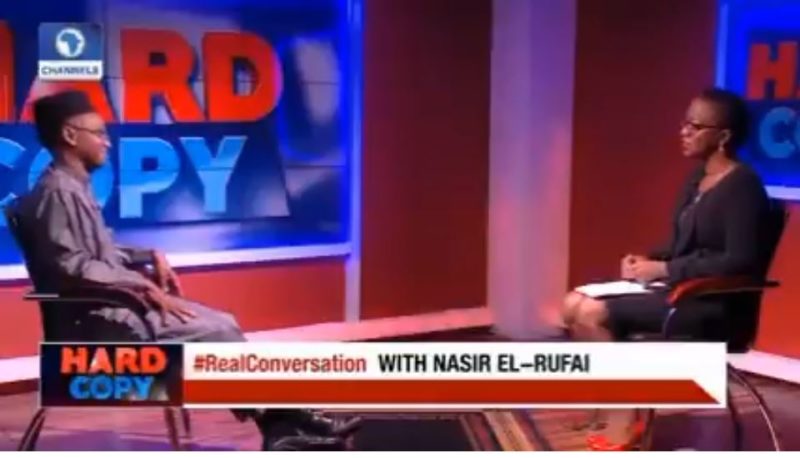 The Governor of Kaduna State, Mallam Nasir El-Rufai, who appeared as a guest on a Channels TV show anchored by Maupe Ogun, told the anchor she might need more lessons in the English Language.

The governor was reacting to a statement credited to him about the Shiites leader, Ibrahim El-Zakzaky.

El-Rufai had said of  El-Zakzaky, “I know the animal I am dealing with”. A comment which Maupe said may be considered as denigrating.

However, in trying to prove that his comment was metaphorical, the governor said,

“It’s an idiom I don’t mean that El-Zakzaky is an animal or anything. You know what I am talking about, if you don’t know then maybe you need more lessons in English Language it is as simple as that.”

Maupe, however, insisted that El-Rufai use another word rather than “animal” to which the governor replied with a smile “I know the person I’m dealing with.”

Now see El-Rufai taking his statement back with a smile. If it was an idiom, Maupe won’t make him do it. pic.twitter.com/WYQsT2TbCX

Recall that El-Rufai had said that his problem with the El-Zakzaky’s movement, was their refusal to acknowledge the state government, the federal government, and even Nigeria’s constitution.

“Shi’ites are citizens of Nigeria and they are entitled to practice their religion, there is no problem with that. Those protesting for the release of El-Zakzaky are not necessarily Shias, they are members of El-Zakzaky’s movement.

“In Kaduna, there are two other Shi’ite organizations that don’t protest, they don’t block highways, they recognize the President of Nigeria and me as the governor of the state and we don’t have a problem with them.


“They are against the state, never recognized the Nigerian constitution.


READ ALSO! AFTER GETTING DRUBBED 5-1 BY BARCA! Real Madrid set to sack coach Lopetegui, may replace him with Conte

“I know El-Zakzaky personally, we were both students at the Amadu Bello University in Zaria, we were both active in the Muslim Students Society so I know the animal I’m dealing with. Many of those making comments on this issue don’t know the history, I was in ABU when El-Zakzaky was dismissed, I know him.”


On outlawing the group, El-Rufai said;

“Outlawing them is the only solution we see and anybody with a different view should tell us.”

HE SLASHED OUR WELFARE PACKAGES! Under Fayose we were treated poorly, Ekiti traditional rulers tell Fayemi