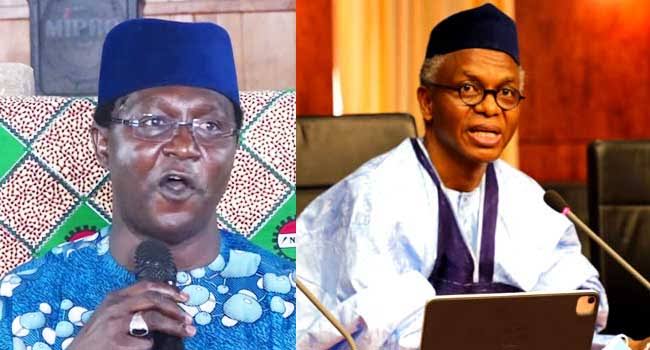 The National President of the Nigerian Labour Congress, Ayuba Wabba, and other members of the union have been declared wanted by Kaduna State Governor, Nasir El-Rufai.

El-Rufai declared the union leaders wanted on grounds of economic sabotage and attacks on public infrastructure under the Miscellaneous Offences Act.

The governor made the statement via his official Twitter handle on Tuesday.

“Anyone that knows where he is hiding should send a message to @MOJKaduna. KDSG. There will be a handsome reward!”

“…The reform of the size, cost & quality of over-bloated, inefficient & barely educated public service is at stake here. We will neither retreat nor concede to any thoughtless & corrupt political hacks ever!”

The state government had vowed that the five-day warning strike by the NLC, which began on Monday, will not deviate from its plan to ‘rightsize’ the State’s civil service.

Wabba, however, reassured civil servants in the State on Monday, saying that the NLC will bring the El-Rufai’s administration to its knees until the sacked workers are reinstated.

Man bitten by shark on Australian beach dies from shock