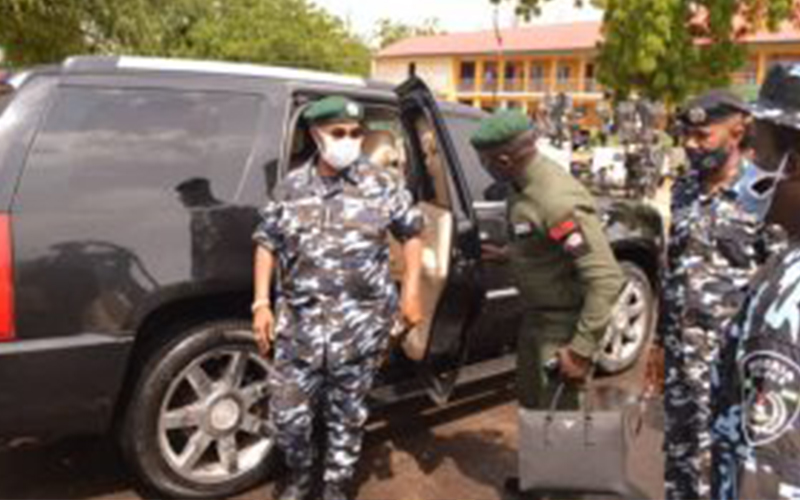 Inspector-General of Police (IGP), Mr Usman Alkaki-Baba, on Tuesday hosted a special feast with officers and men of the Command in Borno, to mark the Eid-el-Kabir celebration.

The News Agency of Nigeria reports that the maiden IGP feast was designed to enable the high ranking police officers to celebrate the festive season with personnel of the Command in the frontline.

The Spokesman of the Command, SP Edet Okon, stated this in a statement on Tuesday in Maiduguri.

Okon said the IGP was at the Command to eat and dine with the men in the spirit of the Sallah celebration, to boost their morale and show them that the high command of the force and Federal Government have them in mind.

He said the IGP commended the officers and men including Special Forces deployed to the state for their resilience, gallantry and dedication to duty.

Okon added that the IGP also promised to make the welfare of personnel a priority.

This, he said, was evident in the efforts of the IGP which resulted in the settlement of outstanding arrears and allowances to personnel on special duty in the state.

According to him, the IGP is showing greater commitment to restore the primacy of the Nigeria Police Force in the security architecture of the country.

The statement also quoted the out-going Commissioner of Police, Mr Bello Makwashi, as reiterating the commitment of the Command to fight crimes in the state.

Makwashi called for more logistic support to the Command to enhance its operations.

In his sermon, the Chief Imam of Maiduguri, Shettima Ibn Saleh, urged the Muslim faithful to pray for peace and stability in the country.

In Bauchi State, Muslim faithful had observed the Eid celebrations in a peaceful atmosphere, as Islamic clerics urged wealthy individuals to support the needy.

Malam Abdulazeez Ibrahim, the Chief Imam of Gwallaga Mosque in Bauchi metropolis, urged wealthy individuals to assist the less privileged with what to eat, to enable them to celebrate Eid in a happy mood.

“By assisting them with food, drinks and other necessities of life, it will make them happy and sustain their life.

“I advise Muslims to imbibe the spirit of sacrifice and good behaviour as exemplified by Prophet Mohammed in their daily lives,’’ he said.

At the Shadawanka Barrack Eid ground, Imam Hashimu Mohammed also stressed the need for helping one another to sustain the livelihood of the deserving households.

He admonished the Muslim faithful to support and uplift one another so that the joy of the Eid-el-Kabir is spread among all.

Mohammed also urged Muslims to use the opportunity of the celebration to rededicate themselves to live up to the ideals of honesty, selflessness and tolerance.

He cautioned Muslims on the need to show love to fellow humans, saying that with the current hardship in the society, we have to overcome it by love.

“If we practice in our lives what God really says about being our neighbours’ keepers, our fortunes as a people will change for the better.

“Eid-el-Kabir is not about slaughtering ram alone but should be aimed at showing love and tolerance among ourselves as well as seeking Allah’s intervention on the challenges facing the country,’’ Babainna said.

The chief imam decried acts of terrorism in the country, calling for prayers from all and sundry for divine intervention.

NAN also reports that the Eid celebrations were generally peaceful across the state.

Speaking on the celebration, Mr Garkuwa Adamu, the Spokesman of the Nigeria Security and Civil Defense Corps (NSCDC), said the celebration was peaceful across the state.

He said that reports received from divisional offices and some units of the Corps indicated that the Eid prayers were observed in various locations peacefully.

“That shows and explains that there is peace across the state,” he said.

In his comment, SP Ahmed Wakil, the Police Public Relation Officer (PPRO) in Bauchi, added that the Sallah celebration was peaceful in the state.

“Reports reaching us from divisions confirmed that the state is calm and quiet. There is nothing contrary to the peaceful conduct of the Sallah celebration across the state,” he said.