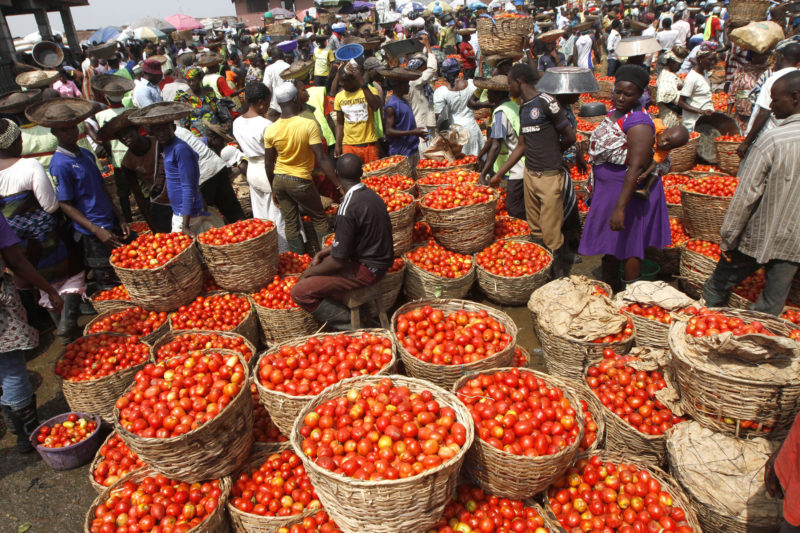 With just two days to the Easter celebration, prices of biodegradable food items seem to have risen in major markets across Lagos.

A survey conducted in some major markets at Mile 12, Oyingbo, and Mushin on Thursday and Friday showed that prices of some food items jumped by more than 25 percent, NAN reports.

However, prices of both local and foreign 50kg bag of rice remained the same at N22,000 and N23,000 respectively for short grains in spite of the Easter celebration.

Spokesperson for Mile 12 Market Traders Association, Femi Odusanya, attributed the situation to the seasonal nature of the farm produces. According to him, harvest is winding down; another planting season is beginning and the variables of demand and supply factor caused the items to be more expensive.

Odusanya, however, appealed for the government’s intervention in the agricultural sector to engender large-scale mechanized farming to address scarcity.

He said that such large-scale farming would increase the sector’s Gross Domestic Product contribution and improve the nation’s economy.

“What has happened is that harvest is winding down, supply is reducing while demand is constant. “And with the Easter celebration, demand has increased so the price would go up.

“What the government can do is to initiate measures that would ensure mechanized farming all over the country.

“By so doing, the prices would be constant as supply is constant and able to meet up with consumption and processing into paste and other things for exportation.

“Money will also remain in the country, the nation will compete better in the Africa Continental Free Trade Area and disposable income will be more meaningful as people can plan better,’’ he said.

MC Oluomo’s use of electronic nose mask trends on Twitter