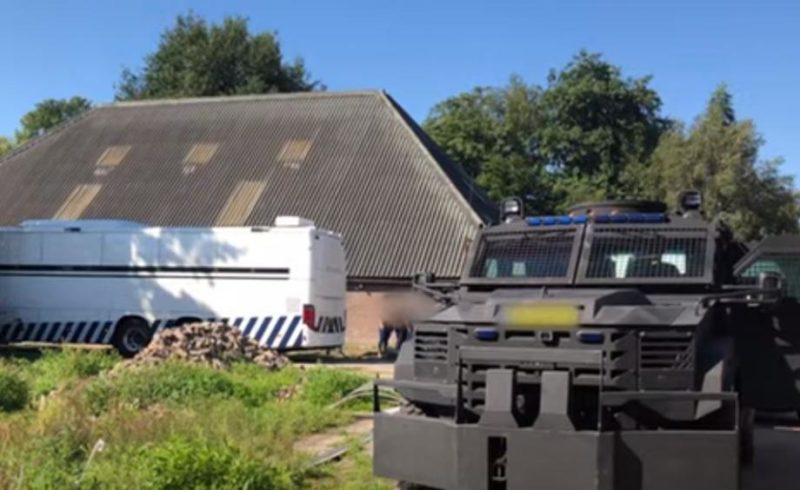 The police in the Netherlands raided and dismantled a massive cocaine washing plant in the Drenthe village of Nijeveen last week.

“This is the largest cocaine laboratory ever found in the Netherlands,” Andre van Rijn of the police’s dismantling facility LFO said. He estimated that the lab could produce between 150 and 200 kilos of cocaine per day.

“That number of kilos equals a street value of between 4.5 and 6 million euros (uncut).”

The police raided the cocaine washing plant on August 7.

The lab was set up in a converted horse riding school. In addition to the laboratory, the police also found sleeping quarters and recreation rooms built on the site.

In such a cocaine washing plant, cocaine is extracted from carrier material, such as clothing, and converted into cocaine base. Sheds in Elshout and Apeldoorn were also raided on the same day, as part of the investigation.

At the lab in Nijeveen, the police found tens of thousands of litres of chemicals and about 100 kilograms of cocaine base. In Apeldoorn, they found about 120 thousand kilograms of carrier material. The drug lab was so large that it took the LFO three days to dismantle it and carefully dispose of the chemical material it contained.

16 suspects were arrested at the production location in Nijeveen, including the owner of the site. One suspect was arrested in Apeldoorn. Three of the suspects have Dutch nationality, one is Turkish, and the other 13 have Colombian nationality, the police said. They are suspected of producing drugs.

The suspects will be arraigned on Wednesday and Thursday.