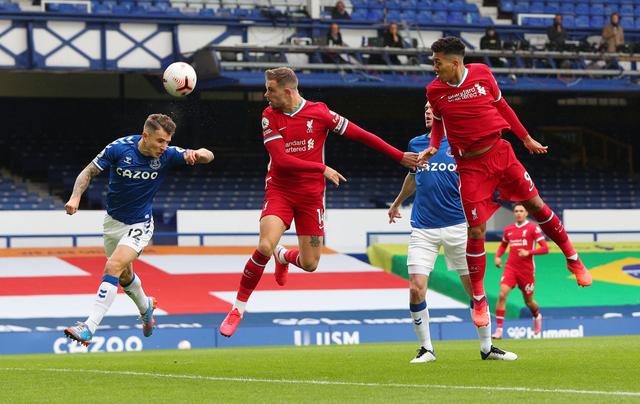 Captain Jordan Henderson thought he had stolen the three points for the Reds with few minutes to the final whistle but his goal was ruled out for Sadio Mane’s offside by the VAR.

Everton went behind in the first half courtesy Sadio Mane’s opener after converting a pass from left-back, Andy Robertson in the third minute.

Liverpool suffered a blow in the opening minutes of the game by losing defender, Virgil Van Dijk to a clumsy challenge from Everton’s goalkeeper Jordan Pickford, who was lucky to avoid a booking.

Van Dijk’s injury left Liverpool vulnerable to set-piece and they paid the price in the 19th minute when Everton equalized through Michael Keane’s header from a well-taken corner-kick by James Rodriguez.

The visitors regained the lead in the second-half through Mohammed Salah in the 72nd minute, paying for missing a few chances earlier in the game.

With the game running out of time, Everton pulled one back through September’s Player of the Month, Dominic Calvert-Lemin in the 81st minute.

Everton suffered a blow late in the game when Richarlison got himself sent off in the 90th minute for a reckless challenge on Thiago, giving the Reds an advantage to steal the win.

Liverpool although managed to return the favour but were denied by VAR for flagging the assist provider, Mane offside by an inch.

Both sides share the spoils, leaving Everton with an unbeaten run since the start of the 2020/21 season.