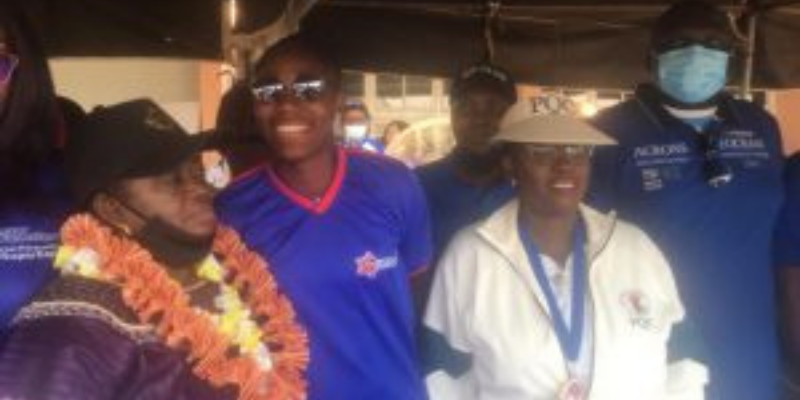 The reigning CAF Woman Footballer of the Year, Asisat Oshoala, has urged Nigerian girls to focus on their education while exhibiting talents in sports, especially football.

Oshoala, who is also the Captain of the senior national female football team of Super Falcons,  spoke at the 59th Inter-House Sports Competition of Queen’s College, Yaba, Lagos, on Saturday.

According to her, proper education can guarantee the success of any individual and ensure the production of exemplary future leaders.

She said that education could go side-by-side with sports, adding that in such a situation,  one should not suffer because of the other.

”I feel very happy to be here today. I am amazed at what I have witnessed here today. It is very heartwarming.

“I am excited seeing girls compete with much zeal in the various sports showcased at this occasion.

”It shows that these girls are discovering their passion for sports unlike what it used to be in the past, where it was an ‘all boys’ thing.

”Talking about football specifically, I will really love to have lots of Asisat Oshoalas in Nigeria, but first thing first: education is very critical,” she said.

The footballer said that there was the need to ensure that young people, especially girls, would take their education serious.

”This, however, does not stop them from showcasing their talents in the area of sports, especially football,” she said.

The four-time CAF African Woman Footballer of the Year, who plies her trade with the  Barcelona Female Football Club in Spain, said that she almost missed out when she decided to opt-out of education to concentrate on football.

‘ I chose sports at some point, but at the end of the day, I realised the place of education and retraced my steps by embracing it, while still being active in sports.

”This, therefore, is the right period to let these girls understand that education and sports can go hand-in-hand,” the Brand Ambassador of Emzor said.

Earlier, the Principal/Director of the college, Dr Tokumbo Yakubu-Oyinloye, said that Queen’s College students were proving their worth in all spheres of human endeavour.

The principal said that the college believed in wholesome education.

According to her, the college has produced notable women in the field of sports.

”We do not only excel in sports, but we also win laurels in academics, technology and other competitions.

”As the foremost all-girls secondary school in Nigeria, we will continue to uphold the core values needed to promote a holistic girl-child education to produce girls who will contribute their quotas to the development of the country.

”The Federal Government has invested a lot to promote education generally in the country as well as provide the enabling environment to enhance excellence in every aspect of teaching and learning.

”I feel very excited and honoured to have in our midst, the reigning Confederation of African Football (CAF) Women African Footballer of the Year, Asisat Oshoala, and I know, her presence will inspire these girls,” she said.

The principal said that the 2021 Inter-House Sports Competition of the college was done in compliance with the Federal Ministry of Education’s directive.

She said that the Federal Government while ensuring that schools had a conducive environment for teaching and learning, desired them to be Coronavirus-free.

Senator urges Nigerians to pray for soldiers on war fronts