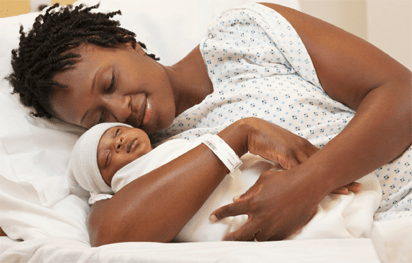 Mayo Clinic, an American academic medical centre, says while there is no required waiting period before a woman can have sexual intercourse after child delivery, it is recommended that women wait until four to six weeks after childbirth to start having regular sex.

The clinic emphasised that the stipulated period is required, regardless of the delivery method.

It further warned that the risk of having a complication after delivery is highest during the first two weeks after delivery, and that waiting will also give the body time to heal.

“In addition to postpartum discharge and vaginal tears, you might experience fatigue, vaginal dryness, pain and low sexual desire. If you had a vaginal tear that required surgical repair, you might need to wait longer,” it stated.

According to Mayo Clinic, pregnancy, labour and vaginal delivery can also stretch or injure a woman’s pelvic floor muscles, which support the uterus, bladder, small intestine and rectum.

It, however, recommended Kegel exercise to firm a woman’s post-delivery body.

PUNCH HealthWise also reported a new mother requires some time off to recover from the rigours of pregnancy and childbirth.

This was further revealed in a recent interview with an obstetrics and gynaecologist at the Federal Medical Centre in Ebute Meta, Dr. Kemi Windapo.

Windapo gave various reasons a new mother is expected to stay off sex until six weeks after childbirth.

The doctor disclosed that postpartum discharge, vaginal tears, fatigue, vaginal dryness, pain and low sexual desire are some of the reasons that make it imperative for a new mother to wait for about six weeks before starting to have sex.

“If you had a vaginal tear that required surgical repair, you might need to wait longer,” she said.

The gynaecologist also warned that having sex less than six weeks after childbirth, especially for women that had episiotomy, can increase the risk of uterine infection.

Windapo, who disclosed this during an interview with PUNCH HealthWise, also said a woman has to be physically and mentally ready before indulging in sex.

“We usually say six weeks, but what we advise is that sex should be initiated when a new mother is physically and mentally ready.

“Some women can heal faster than others, and there’s no hard and fast rule about it. If a woman has healed and she is ready by six weeks, then she can have sex,” she said.

The gynaecologist pointed out that one of the factors that discourages women from having sex after childbirth is pain, noting that it instils in them the fear of getting intimate with their partner.

She noted that within six weeks, it is expected that a woman that had an episiotomy [surgical cut to widen the vaginal canal to allow for easy passage of the baby] would have healed and be pain-free.

She, however, said the psychological and physiological make-up of individuals differs.

“The danger in having sex before six weeks after childbirth is the accompanying pain and breakdown, which signals the onset of infection if the episiotomy site is not properly healed.

“If it happens, that means the woman will be in and out of the hospital for a longer duration. And that means she will have to take medications for longer than usual.

“As long as the woman is pain-free and the episiotomy area is completely healed, she can go ahead with sex,” she added.

Related Topics:Doctors explain why ladies are discouraged from having sex until six weeks after childbirth
Up Next