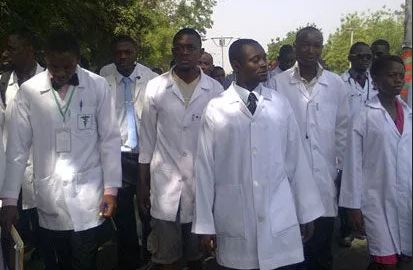 Ondo chapter of the National Association of Government General Medical and Dental Practitioners has commenced two weeks warning strike over alleged neglect of doctors’ welfare by the state government.

The association alleged that the state government had failed to address the exodus of medical doctors and health workers in the state just as it avoided paying their salaries arrears.

The statement was contained in a letter addressed to the State Governor, Rotimi Akeredolu, by NAGGMDP State Chairman and Secretary, Dr Roland Arohunmolase, and Dr Richard Obe respectively.

The statement reads: “With due respect to your office, we write to notify your office of the immediate withdrawal of service by our members working under Ondo State Government Civil Service. Following Ordinary General Meeting of our association held on Wednesday, June 9, 2021, members resolved at proceeding on two weeks warning strike starting from 8:00 am, 10th of June, 2021.”

The development came few days after the state chapter of Nigeria Medical Association urged the government to resolve the issue of the welfare of doctors in the state to curb the exodus of medical personnel in the state.

Tribune reported that the grounds for the industrial action included “non-payment of salaries arrears being owed health workers in Ondo State (January 2017, March, April and May 2021), Gross under-staffing of government hospitals following the mass exodus of doctors and other health workers from the state.

“Non-regular payment of salaries and non-harmonisation of doctors’ grade level in Ondo State Civil Service as approved by Mr Governor which is contained in the letter written to Nigerian Medical Association Ondo State in March 2021.”

Other grounds were “percentage payment of salaries to health workers, non-payment of the third tranche of COVID-19 allowance, non-implementation of Group Life Insurance for all Health workers,”

“Against this backdrop, we wish to let you know that our members have been overstretched and their emotional intelligence badly affected.”

The doctors further said: “Ondo State is being overpopulated and this has increased the numbers of patient patronage at various government-owned health facilities. Invariably it has become unbearable to cope with the deplorable state of things in Ondo State Government-owned hospitals.

“We hereby state that it is not the wish of our members to proceed on this industrial action, but it is necessary to draw your attention and that of the citizenry to the afore-mentioned.

“The Association hopes Mr Governor will do the needful in addressing our dissatisfaction as contained in this letter,” the doctor stated in the letter.

Related Topics:doctorsNAGGMDPWarning strike
Up Next

Why patients are made to pay for blood screening – expert