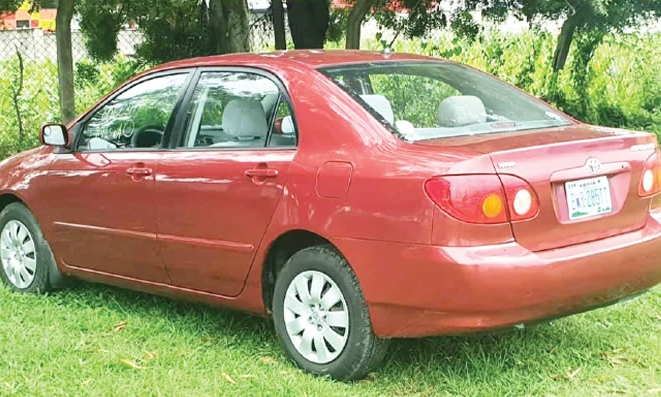 A 25-year-old medical doctor, Gabriel Adedoyin, has made a passionate appeal to the Nigerian Police to help recover his car after it disappeared from the popular Tako Market in the Federal Capital Territory.

Narrating the ugly ordeal, the Abuja based doctor and graphic artist said that he was returning from church when he stopped at the market to purchase some items.

Adedoyin disclosed that when he was done, his red Totoya Corolla car with number plate BWR285TT has disappeared along with his laptop, tablet, €200 and other personal effects, the PUNCH reports.

Adedoyin, who lamented his losses, said he had some pending jobs on his laptop that he needed to deliver to his customers.

He said, “I was on night duty as a doctor and went to church from there, and after service, I decided to pick up some things from the market. Around 12.30pm on Sunday, I parked my car in front of the Tako Market in Abuja and went inside, and spent about 20 minutes in the market.

“I came out and realised that my car was no longer at the spot, where I parked it; I thought I forgot where I parked it, so I went around the market to check for it and I asked people around, but they claimed that they didn’t see any car there.

“I went to the Utako Police Station to report the incident and I was told that the command centres and other sister agencies would be radioed so that security agents would be on the lookout for the car, but I have not got any positive response from them. My laptop, tablet, €200 and other personal effects were inside the car.

“The incident has affected me because it has been difficult to move around, and it has made things difficult for me. The big part is my laptop and tablet, which I use for graphic design and IELTS tuition. I have not been able to do any of that; these extracurricular activities have been grounded. I have a whole lot of pending jobs on the devices that I am supposed to deliver, but now I can’t complete them and customers are calling for their jobs.”

Adedoyin told our correspondent that some friends opened a Gofundme account for him to raise money to buy some of the lost items.

He, however, lamented that Nigerians could not donate to the account.

“A Gofundme account was opened by a cluster of my friends, but Nigerians cannot donate; so, it has limited a whole lot of contributions; I have only been able to get about €200. A lady on Twitter led the fund raising for me to buy another laptop.

“I just want to order another laptop. I want the police to help me to find my car and its content, that’s the ultimate I want from them.”

When contacted, the Police Public Relations Officer, FCT, Mariam Yusuf, did not take her calls and had yet to responded to a text message sent to her mobile phone on the incident.