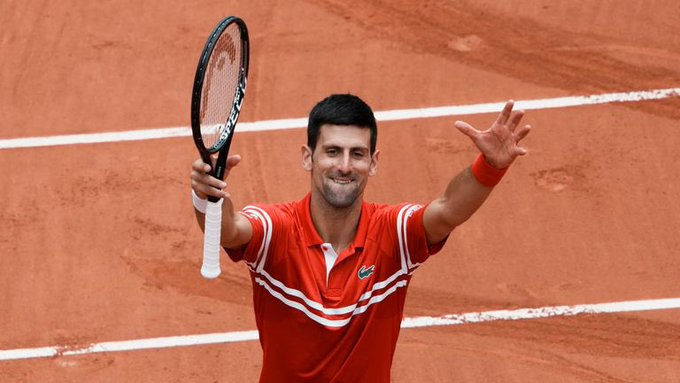 World No. 1, Novak Djokovic, showed class and experience to win the 2021 Roland Garros by coming from two sets down to defeat Stefanos Tsitsipas in the French Open final on Sunday.

The Serbian crushed Tsitsipas’ hopes of lifting his first-ever Grand Slam title in his debut final at Roland Garros after the intense battle ended 7-6, 6-2, 3-6, 2-6, 4-6.

The fifth seed Tsitsipas put up a daring and clever display against the Serbian in a very tight contest in the first set and emerged victorious by 7-6(6) in his Roland Garros final debut.

Tsitsipas had it easy in the second set which he won by 6-2, leaving the Greek a set away from his maiden Slam title, but the third set proved difficult as the Serbian giant dragged Tsitsipas into the fourth set by winning the third 6-3.

The Serbian rallied to crush Tsitsipas’ momentum almost immediately the fourth set began as he went two games up before adding two more to make it 4-0, pushing the game towards the fifth set except Tsitsipass can regain his form in the first two sets.

As expected, the fifth set was a cracker as both players, starting with Tsitsipas who drew the first blood, shared the first two games (1-1) took the lead in the final set but slipped further as the World No. 1 regained the lead by 3-1.

The Greek almost lost an advantage, which has been his undoing so far in the game, after slipping from 30-love but managed to scale through to take the score to 3-2.

Although it was a tight encounter afterwards, Djokovic kept the pressure on and went on to win the final set by 6-4 to be crowned the winner of the 2021 French Open tournament.