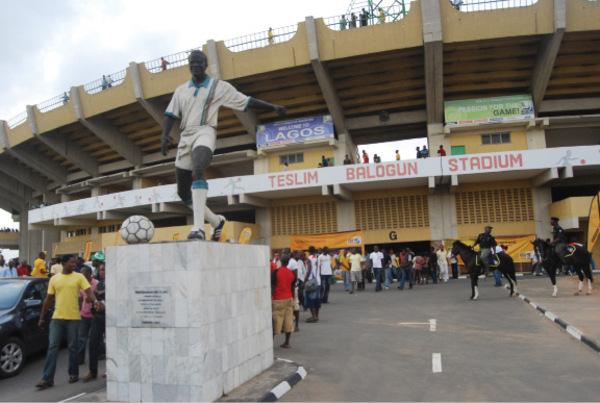 The tickets for the Nigeria versus Lesotho 2021 Africa Cup of Nations qualifier at the Teslim Balogun Stadium on Tuesday were sold to desperate fans for as much as N15,000, despite a directive from the Lagos State Government that tickets were free and should not be sold.

The Confederation of African Football had allowed the Nigeria Football Federation to have 30 per cent of Teslim Balogun Stadium’s 24,325 seat capacity.

With high demands for tickets because the Super Eagles were playing competitive football in Lagos for the first time in 20 years, the state government announced that the tickets would be distributed free of charge to selected members of the public.

“The game is not open to the general public. Tickets will not be sold. We are working with the Nigeria Football Federation on a strict selection process for the few fans that will be in the stands,” Sola Aiyepeku, the Chairman of the Lagos Sports Commission, said ahead of the game.

The PUNCH correspondent, who was at the stadium, discovered that just at the entrance of the stadium, the tickets, which were in high demand, were sold for as much as N15,000, with fans bargaining for lower prices.

Our findings showed that depending on negotiations, prices for the tickets ranged from N3,000 to N15,000 as fans, desperate to watch the Eagles, made frantic efforts to find their way into the match venue.

The tickets were sold in the presence of security operatives, who turned a blind eye as the touts smiled to the bank with their illegal business.

The atmosphere got more intense as the time kick-off time for the game drew closer, with supporters outside the stadium five times more than those who gained entry.

The touts capitalised on this and made quick cash through the sale of the tickets.

When the team bus conveying the Lesotho national team drove into the stadium, the visitors also threw their tickets to the cheering fans and touts, who after picking them, resold to other fans.

Some of the fans told our correspondent they bought the tickets because of the hunger to watch the Eagles play again in Lagos.

It is the first time since the outbreak of the coronavirus pandemic that fans were allowed into the stadium to watch a live football game in Nigeria.

The Eagles outclassed their opponents 3-0 to close their Group L AFCON qualifying group without a loss. They won four games, with two draws.

Efforts to reach Aiyepeku on the matter proved abortive as he didn’t pick our correspondent’s calls. Also, a text message sent to his line was not replied as at the time of filing this report.