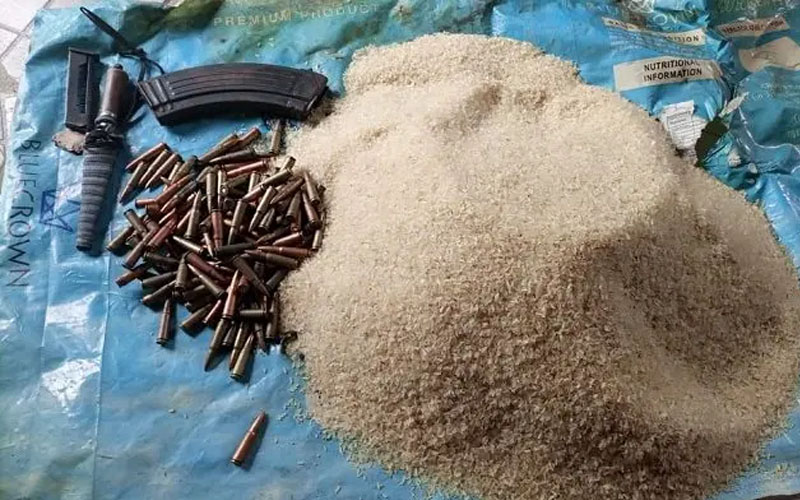 Police operatives in Delta State have uncovered 138 rounds of AK-47 live ammunition, one AK-47 magazine, one Baretta pistol magazine, and a knife carefully concealed in a bag of rice.

The bag of rice containing the ammunition was uncovered in a commercial vehicle, with the registration number UGH 722 along the Ughelli-Porthacourt Road on Friday.

The state’s Acting Police Public Relations Officer, DSP Bright Edafe, in a statement on Saturday, said the car was intercepted with six passengers on board during a routine check by the police.

Edafe said, “On 11/6/2021 at about 16:30hrs, while team Eagle-net Special Squad was on routine patrol/stop and search along Ughelli-Porthacourt road intercepted a Mazda 626 saloon car dark green in colour with Reg. No. UGH 722 AA with six occupants of two males and four females.

“All occupants were asked to come down from the vehicle for searching and in the process of searching, a sack containing rice, a man, whose name is not yet known among the occupants jumped into a nearby stream running and escaped into the forest.

“The bag of rice was identified by other passengers as his own and when it was searched, one hundred and thirty-eight (138) rounds of AK-47 live ammunition, one AK-47 magazine, one Baretta pistol magazine, and a knife were recovered.

“Preliminary investigation revealed that the occupants are all passengers that boarded the cab from Eleyele PHC heading to Ughelli.”

He promised that the fleeing owner of the bag would be apprehended.