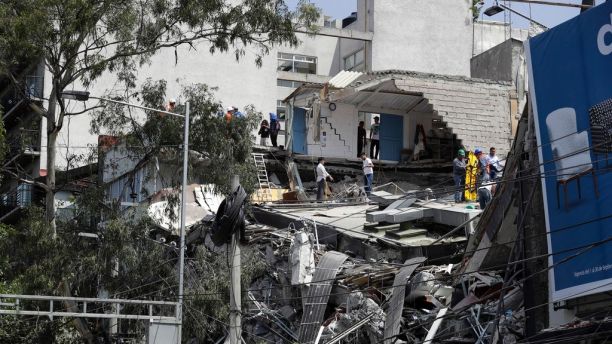 The death toll from a powerful earthquake that rocked Mexico on Tuesday has surged to 224 people, including 117 in the capital, said Interior Minister Miguel Osorio Chong.

The dead included at least 21 children crushed beneath a primary school that collapsed on Mexico City’s south side during the 7.1-magnitude Mexico earthquake, authorities said.

Hours after the magnitude 7.1 quake, rescue workers were still clawing through the wreckage of a primary school that partly collapsed in the city’s south looking for any children who might be trapped. Some relatives said they had received Whatsapp message from two girls inside.

The federal Education Department reported late Tuesday night that 25 bodies had been recovered from the school’s wreckage, all but four of them children.

Puebla Gov. Tony Gali tweeted there were damaged buildings in the city of Cholula, including collapsed church steeples.

In Jojutla, a town in neighboring Morelos state, the town hall, a church and other buildings tumbled down, and 12 people were reported killed.

The Instituto Morelos secondary school partly collapsed in Jojutla, but school director Adelina Anzures said the earthquake drill that the school held in the morning was a boon when the real thing hit just two hours later.

“I told them that it was not a game, that we should be prepared,” Anzures said of the drill. When the shaking began, children and teachers filed out rapidly and no one was hurt, she said. “It fell and everything inside was damaged.”

Earlier in the day, workplaces across Mexico City held earthquake readiness drills on the anniversary of the 1985 quake, a magnitude 8.0 shake that killed thousands of people and devastated large parts of the capital.

In that tragedy, too, ordinary citizens played a crucial role in rescue efforts that overwhelmed officials.

Man stabs self, jumps into well in suicide bid