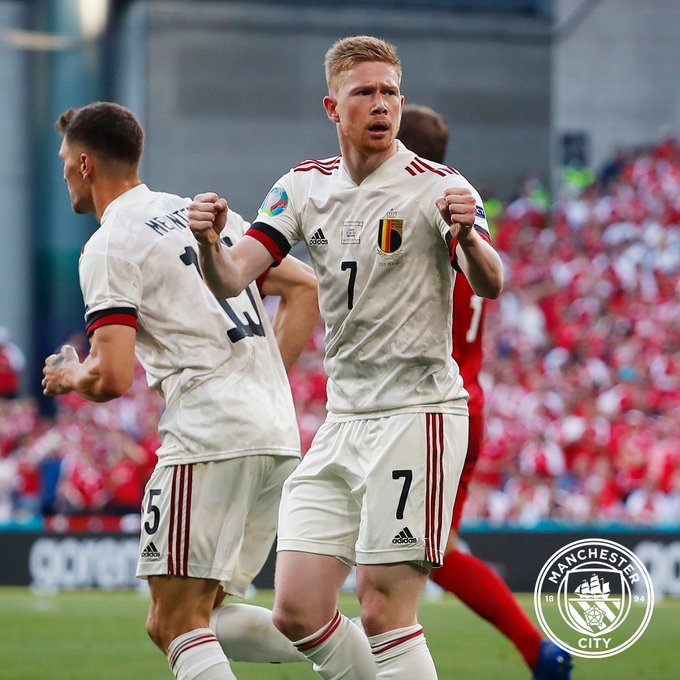 Manchester City midfielder, Kevin de Bruyne, marked his return to the Belgian squad with a winning goal that sent the team into the last 16 of the EURO 2020 championship at the Parken Stadium.

De Bruyne who suffered a facial fracture sustained in Manchester City’s Champions League final defeat by Chelsea missed Belgium’s opener against Russia but returned to the squad after being listed on the bench by coach, Roberto Martinez.

In a game where both teams paid tributes to Denmark’s midfielder, Christian Eriksen, who is recovering from a cardiac arrest in their opening 1-0 defeat to Finland, coach Kasper Hjulmand has made two changes by fielding Jannik Vestergaard and Mikkel Damsgaard in place of Jonas Wind and Eriksen who remains in hospital.

Denmark got to a good start by netting an early goal through Yussuf Poulsen after just two minutes into the match with an assist from Tottenham’s Pierre-Emile Højbjerg.

The former Southampton star pounced on a mistake from Jason Denayer before teeing up Poulsen who drilling a low shot beyond the reach of Real Madrid’s Thibaut Courtois.

Denmark pushed further with the lead for almost an hour but failed to finish off the game while the Red Devils earnestly searched for an equaliser.

Belgium however found a breakthrough moments after Martinez introduced City’s De Bruyne for Dries Mertens in the 46th minute, changing the dynamics of the game.

De Bruyne connected with Romelu Lukaku who led a massive counterattack in their first meaningful attack of the game before the City man slotted a pass to Borussia Dortmund’s Thorgan Hazard who netted the equaliser from close range in the 54th minute.

The Red Devils pushed for the win afterwards and got the winner through De Bruyne in the 70th minute after Lukaku combined with Leicester City’s Youri Tielemans and Real Madrid’s Eden Hazard who teed up De Bruyne to beat Leicester’s Kasper Schmeichel with a superb low strike into the left corner.

Denmark knocked the post afterwards as they searched for an equaliser but they failed to stop Belgium from becoming the second team through to the knockout stages of Euro 2020 after Italy.