Davido’s aide, Israel DMW has reacted after DJ Cuppy threatened to sue him for libel and defamation.

Recalled that the DJ had called out the PA to popular singer, Davido over his statement that she allegedly breached her agreement with rapper Zlatan Ibile.

She however denied the allegation in a post she made on social media and then vowed to sue him.

“For the record… There have been no breaches of my contractual agreement regarding the song #Gelato as confirmed by lawyers… However, as @IsrealDMW publicly inaccurately declared I owe an artist money, I am suing him for libel and defamation! See you in court Isreal.”

Israel however insisted she never dished out any form of cash or support to Zlatan and dared her to send him to jail him. 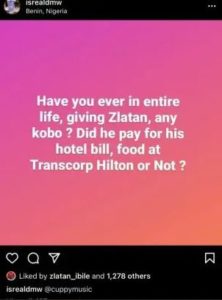