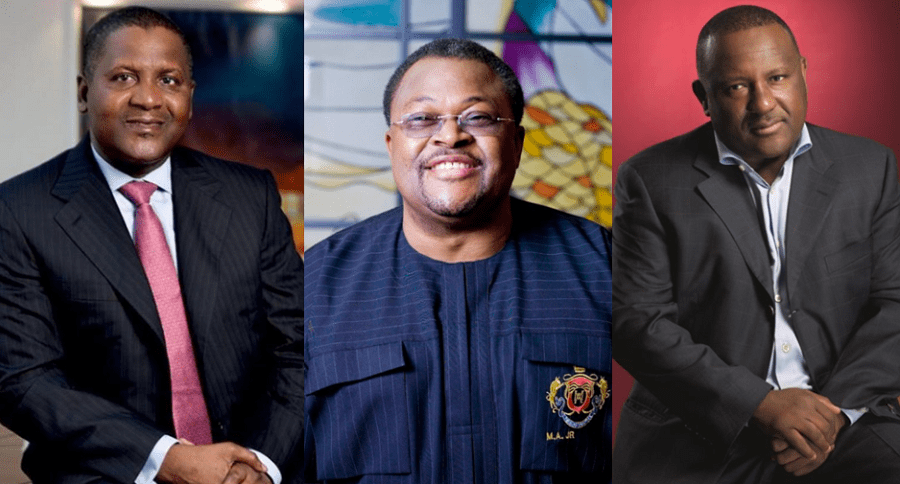 The Forbes’ 2021 World’s Billionaires list revealed that the combined net worth of Nigeria’s three richest personalities has soared by $5.7bn in one year.

The list, which was released on Tuesday, includes 14 African billionaires, with Chairman of Dangote Group, Aliko Dangote, leading the pack.

The Chairman of Globacom and Conoil Plc, Dr Mike Adenuga, who is Nigeria’s second richest person and the fifth on the continent, was ranked 440th as his fortune rose to $6.1bn from $5.6bn last year.

The wealth of the founder of BUA Group, Abdulsamad Rabiu, surged to $4.9bn from $2.9bn in 2020, making him the 574th richest person in the world and the sixth in Africa.

The other Africans on the list comprised five South Africans, five Egyptians and one Algerian.

The second richest African, Nassef Sawiris, was ranked 297th on the list with a net worth of $8.3bn.

The founder and Chief Executive Officer of Cevital, Algeria’s biggest privately-held company, Issad Rebrab, and his family were ranked 589th with a net worth of $4.8bn.

The founder and CEO of Amazon, Jeff Bezos, is the world’s richest for the fourth year running, worth $177bn, while Elon Musk, co-founder and CEO of Tesla, rocketed into the number two spot with $151bn, as their shares surged.

“It’s been a year like no other, and we aren’t talking about the pandemic. There were rapid-fire public offerings, surging cryptocurrencies and skyrocketing stock prices,” Forbes said.

According to the American business magazine, the number of billionaires on Forbes’ 35th annual list of the world’s wealthiest exploded to an unprecedented 2,755 – 660 more than a year ago.

Why I didn’t respond to Buhari’s ‘Other Room’ metaphor, Aisha reveals in new book