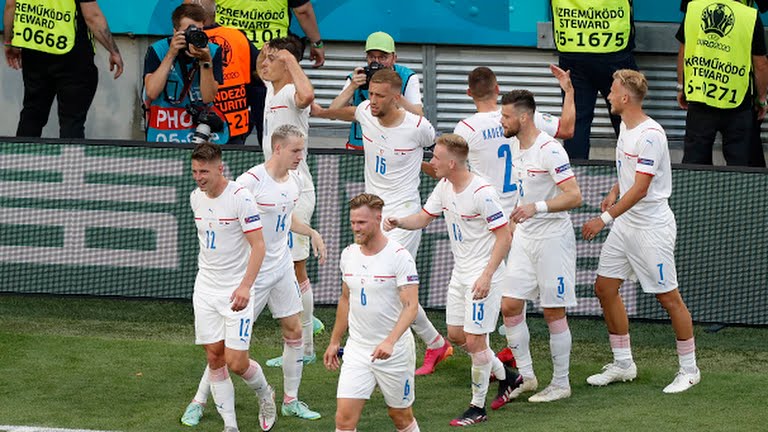 Czech Republic have eliminated one of the EURO 2020 favourites, The Netherlands, by securing a 2-0 victory at the Ferenc Puskás Stadium in Budapest on Sunday evening.
Frank De Boer made one change to his Netherlands side that beat North Macedonia 3-0 last time out, with Gravenberch replaced by De Roon in midfield, while the Czech Republic made three changes to their starting line-up, with Boril, Darida and Jankto those dropping to the bench and they have been replaced by Kaderabek, Sevcik and Barak.

The Dutch side who finished top of Group C with a perfect record, scoring eight goals and conceding just two, failed to break their opponent’s defence throughout the entire first half.

Donyell Malen found himself in front of the Czech Republic keeper but he missed the huge chance by failing to beat Tomáš Vaclík in the 52nd minute before the Dutch were dealt a self-inflicted injury three minutes later.

The Netherlands were reduced to 10 men in the 55th minute after the referee reviewed a deliberate handball by Matthijs de Ligt through the VAR, leaving the Dutch vulnerable.

With the Dutch reduced to 10 men, Czech Rep. picked up the pace and were almost awarded a penalty moments later but the Netherlands were let off the hook after the VAR reviewed the possible handball by Quincy Promes.

Czech Rep. finally found a breakthrough after pushing further through a corner kick that found the head of Tomáš Holeš to the back of the net in the 68th minute, sending the Dutch fans into deep silence.

The Netherlands were caught napping in the 80th minute when they failed to clear the in their half, allowing Holes to steal the ball off the toes of Wijnaldum before driving into the 18-yeard box to tee up Patrik Schick who netted to make it 2-0.

Czech Republic are now through to the quarterfinal of the competition and would face Denmark who beat Wales 4-0 on Friday.

Serena Williams rules self out of Tokyo Olympics