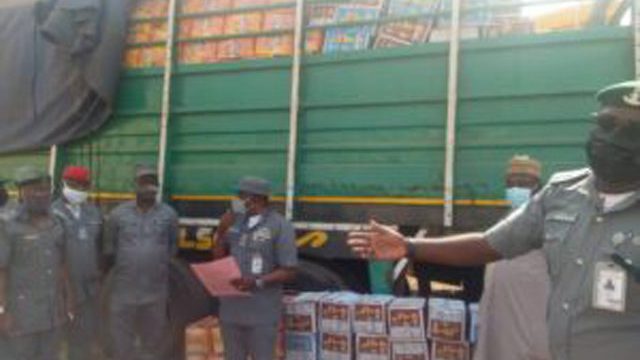 The Nigeria Customs Service (NCS) has handed over 4,907 cartons of seized expired sweets and chocolates valued at N23.7 million to National Agency for Food and Drug Administration and Control (NAFDAC).

The Commander of Comptroller-General of Customs’ Strike Force, Hussein Ejibunu said this while handing over the items to NAFDAC officials in Karu, Abuja on Friday.

Ejibunu said the trailer, which was loaded with the seized items was intercepted in Abaji along Lokoja-Abuja Highway on Dec. 16, 2020.

He said the items seized, which had no NAFDAC’s certification and expiring date were said to have been manufactured in India and Pakistan based on preliminary investigation conducted by the service.

The commander gave the breakdown of the seized items as 4,882 cartons of Deluxe Toffees sweet and 25 cartons of Jolly Boy Chewy Lollipop.

According to him, one suspect that was arrested in connection with the truck loaded with the seized items is being handed over to NAFDAC.

“In the spirit of inter-agency collaboration, it behoves on us to do this and hand it over to the appropriate agency.

“It is our primary responsibility of making sure that the Federal Government’s fiscal policies are followed accordingly.

“From our investigation, these items have no NAFDAC numbers which means they are capable of creating health hazard for Nigerians. We all know that things that are not certified by NAFDAC could be harmful.

“We are doing everything possible to curtail the activities of smugglers. If you talk of smuggling, there are still smart people who use dubious ways to escape the watch-and- check of Customs.

“Like this one, they must have followed unapproved routes, thank God we have our men on the road who intercepted them” he explained.

The NAFDAC’s Director of Planning, Research and Strategies, Fori Tatama, who received the items on behalf of the Director-General, Prof. Moji Adeyeye thanked the NCS for the collaboration.

Tatama said the development showed the importance of collaboration and synergy among agencies of government.

He lauded the effort and commitment of the present head of Customs in addressing smuggling in the country.

He pledged that after the NAFDAC’s further investigation, the culprit would be prosecuted accordingly.