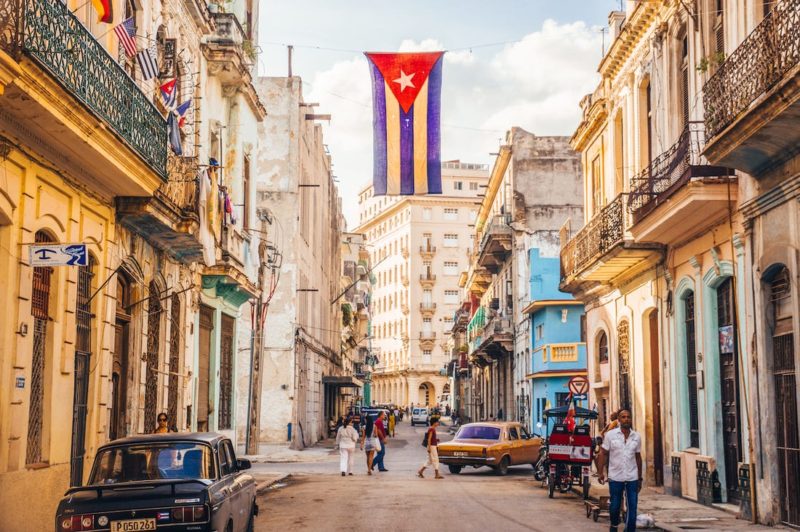 Havana on Monday blamed a US “policy of economic suffocation” for unprecedented protests against Cuba’s communist government as Washington pointed the finger at “decades of repression” in the one-party state.

The longtime foes traded barbs a day after thousands of Cubans took to the streets chanting: “Down with the dictatorship” in protests dispersed by police who arrested dozens.

The anti-government rallies erupted spontaneously in several cities as the country endures its worst economic crisis in 30 years, with chronic shortages of electricity, food and medicine and a recent worsening of the coronavirus epidemic.

The only authorized gatherings in Cuba are usually events of the ruling Communist Party, but according to the data journalism site Inventario, a total of 40 demonstrations took place on Sunday.

President Miguel Diaz-Canel blamed the discontent on the United States pursuing a “policy of economic suffocation to provoke social unrest in the country.”

Cuba has been under US sanctions since 1962.

“What do they want? To provoke social unrest” with a view to “regime change,” he said in an address broadcast on public television and radio.

In a statement from Washington, US President Joe Biden expressed support for the protesters’ demand for relief “from the decades of repression and economic suffering to which they have been subjected by Cuba’s authoritarian regime.”

Secretary of State Antony Blinken said it would be a “grievous mistake” for Cuba to blame the United States for the protests he said could be traced to the communist leadership’s “mismanagement” of the economy and Covid-19.

US-Cuba relations have been particularly fraught since then-president Donald Trump reinforced sanctions following an historic but temporary easing of tensions under Barack Obama between 2014 and 2016.

The tougher measures, left unchanged by Biden, and the collapse of tourism due to the global pandemic contributed to Cuba’s economy declining 11 percent in 2020.

On Sunday, several hundred protesters marched through the capital Havana chanting: “We want liberty” as police and soldiers kept watch.

Social media showed scenes of rallies around the country despite the mobile internet — only introduced to the island in 2018 — being mostly offline on Sunday afternoon. It remained so by lunchtime Monday.

The EU and UN on Monday called for Cuba to respect freedom of expression and peaceful assembly.

“I would like to call on the government there to allow peaceful demonstrations and to listen to the discontent being expressed by the demonstrators,” EU foreign policy chief Josep Borrell said.

Brazil’s far-right President Jair Bolsonaro, himself under fire at home for his management of the Covid-19 crisis, expressed “solidarity” with protesters seeking “an end to a cruel dictatorship.”

And Trump said in a statement: “I stand with the Cuban people 100 percent in their fight for freedom.”

But Mexico and long-term Cuban ally Russia warned against using the unrest as a pretext for foreign interference.

“What we want is change,” said Yamila Monte, a Cuban domestic worker of 54.

“I have had enough,” she told AFP, recounting the difficulty she and other Cubans have in making ends meet.

The last major protests, and the first since the revolution that brought Fidel Castro to power in 1959, were also against economic hardship but were limited to the capital and quickly stopped.

The country of 11.2 million people is experiencing its toughest phase of the coronavirus pandemic, and on Sunday reported a new daily record of infections and deaths.

On Monday, there were no protesters left in the streets of Havana, patrolled by police and soldiers.

– ‘Into the street, revolutionaries!’ –

Security forces arrived soon after, and Diaz-Canel visited the town surrounded by party activists as residents heckled him, according to videos posted online.

The president Diaz-Canel delivered a combative television address Sunday, saying: “The order to fight has been given — into the street, revolutionaries!”

He called on “all communists to go out in the streets where these provocations occur… and to face them in a decisive, firm and courageous way.”

Government supporters also held counter-demonstrations in Havana, where the Associated Press news agency said a video journalist was assaulted by the counter-protesters and a photographer injured by police.

US National Security Adviser Jake Sullivan cautioned Havana against “any violence or targeting of peaceful protesters.”

Cuba’s chief diplomat Bruno Rodriguez retorted Monday that the US “genocidal blockade” of Cuba was the cause of its economic difficulties.

In Venezuela on Monday, a handful of Cuban government supporters gathered outside the embassy in Caracas chanting “Cuba yes, Yankees no!”

In Miami the previous day, thousands of Cubans and Cuban-Americans marched in support of the protesters back home.

AFP
Related Topics:CubaUS
Up Next