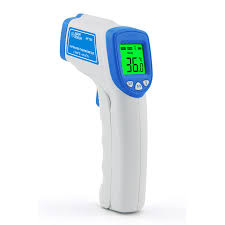 The leader of the committee, Chief Patrick Ezeagu, presented the items to Dep. Gov. Cecelia Ezeilo at the Government House, Enugu.

Ezeagu, who spoke on behalf of the National Chairman of the committee, Mr Ariyu Olushekan, said that the Security and Exchange Commission (SEC) had observed the giant stride by the Enugu state government in the fight against COVID-19.

He said that SEC set up CMSCC with the primary mandate to mobilize funds from the capital market communities in Nigeria to support the fight against the pandemic.

”In furtherance of the mandate, the committee hereby extends its support through the donation of 150 units of infrared thermometer for use in schools.

”As schools are about to resume for academic activities, the infrared will help to checkmate the spread of the pandemic among the students.

”Together, we shall overcome this pandemic,” Ezeagu said.

Responding on behalf of Gov. Ifeanyi Ugwuanyi, the deputy governor thanked the committee for its gesture.

“I’m sure that the government’s efforts in the fight against the pandemic prompted this donation at this point of school reopening.

”On behalf of the people of the state and the governor, I say thank you for this wonderful and timely gesture,” Ezeilo said.

Related Topics:EnuguInfared thermometers
Up Next

NAFDAC cautions public on abuse of alcohol in sachet