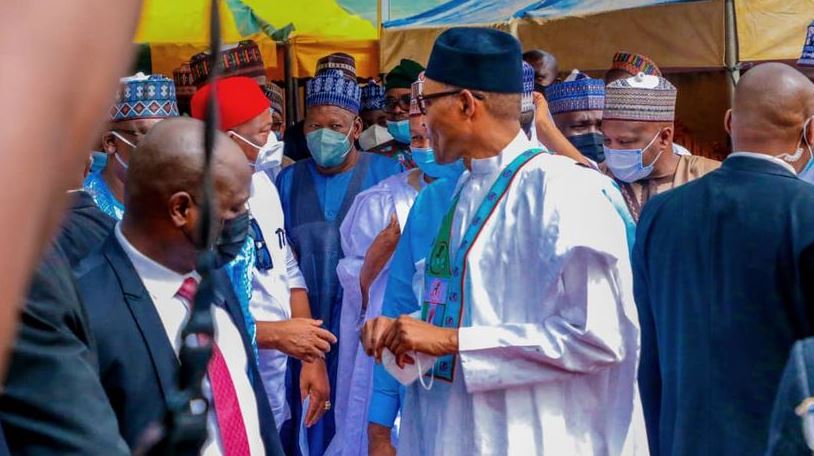 The Senior Special Assistant to the President on Media and Publicity, Garba Shehu, has said that his principal had his mask on during the exercise but only removed it when he spoke to the microphone.

Following the uproar on social media, the Presidency, on Monday, has reacted after Nigerians accused  President Buhari of flouting the COVID-19 protocols in Daura, Katsina State over the weekend.

Online photos had shown Buhari discussing with some All Progressives Congress governors at the revalidation of his APC membership in Daura on Saturday without putting on a mask or maintaining social distancing as stipulated by the newly signed Coronavirus Disease Health Protection Regulations (2021).

The Peoples Democratic Party and Nigerians on social media had slammed the President for the contravention of the regulations which made the use of face masks in public places mandatory among other measures to curtail the spread of COVID-19.

The regulations also stipulate a fine or six months imprisonment or both for violators.

Speaking on Monday, the Senior Special Assistant to the President on Media and Publicity, Garba Shehu, said his principal had his mask on during the exercise but only removed it when he spoke to the microphone.

This is at variance with health advice by the Presidential Task Force on COVID-19 that Nigerians should have their mouths covered with masks during speeches to keep off respiratory droplets through which the virus can be transmitted.

But Shehu, who spoke on Channels Television’s Sunrise Daily programme monitored by The PUNCH, said, “People are missing the point. The President had his face mask on through that engagement. He had it off when he was speaking into the microphone. It is just a childish antics by PDP.”

The President has also been criticized for mobilizing no fewer than nine governors to accompany him to Daura despite the government’s social distancing health advice.

The presidential spokesman, however, said there was nothing wrong with the number of governors and APC chieftain in the delegation.

“This is to drive the spirit of the re-registration and the revalidation of membership. We must convey to the nation that we the party are behind the process and everyone is involved.

“The criticism is coming from parties that are not able to organize and mobilize, we feel sorry for them,” Shehu said.

Related Topics:BuhariFeaturedGarba Shehu
Up Next