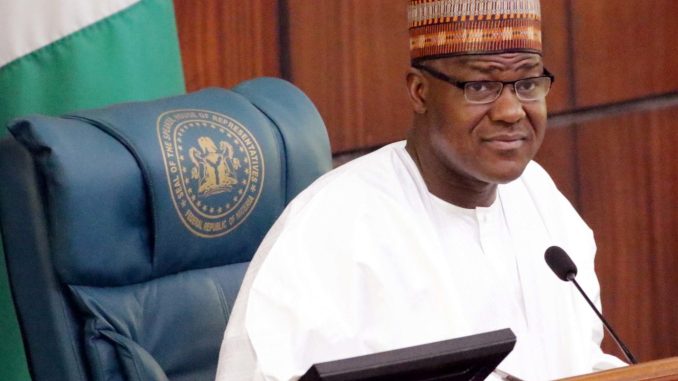 The Peoples Democratic Party (PDP) has instituted a suit, asking the Federal High Court in Abuja to sack a former Speaker of the House of Representatives, Yakubu Dogara, for defecting to the All Progressives Congress (APC).

Justice Okon Abang, has subsequently fixed February 4, 2021 for further hearing, on the grounds that it was not convenient for the court to take the matter.

It was reported that while the PDP and its Bauchi State Chairman, Hamza Akuyam, are the plaintiffs, Dogara, who was the immediate-past Speaker, House of Representatives; the speaker of the House; the Attorney General of the Federation (AGF); Independent National Electoral Commission (INEC) and the APC are 1st to 5th defendants respectively in the suit marked: FHC/ABJ/CS/1060/2020.

MORE READING!  Evangelist to court: Swearing on the Bible is 'worst sin on earth', will bar me from Heaven

Report says that Dogara, who represents Dass, Tafawa Balewa and Bogoro Federal Constituency of Bauchi State, had, on July 24, 2020, defected from the PDP to the APC when he submitted a resignation letter to the chairman of the Bogoro ‘C’ Ward in the state.

Counsel to the plaintiffs, Jubrin Jubrin, and lawyer to the APC, Mustapha Balogun, at the resumed hearing, informed Justice Abang of their pending application shortly after the judge adjourned the matter.

The PDP and other defendants however approached the court on Monday, arguing that, giving the nature of the matter, it was meant for timely and speedy disposal.

They, therefore, prayed the court for abridgment of time, Justice Abang said though it was not convenient for the court to hear the case, he however granted their prayer by fixing Feb. 4 as against March 5 for the hearing of the matter.

Abang ordered that hearing notice should be served on the 2nd (Speaker of House of Representatives) and 4th (INEC) defendants who were not represented in court.

Shortly after the proceeding, Jubrin told journalists that his clients were contending among others, that by virtue of Section 68(1)(g) of the constitution, Dogara by defecting from the party that sponsored him to the ninth National Assembly before the expiration of his tenure, ought to vacate the seat as he was no longer qualified to partake in the activities of the lower house.

Jubrin said the PDP members in the state were aggrieved by Dogara’s action.

“We are here to ask for justice in respect of what Hon. Dogara did for our party and the people of his constituency.

“So, we are asking the court to declare his seat vacant,” he said.