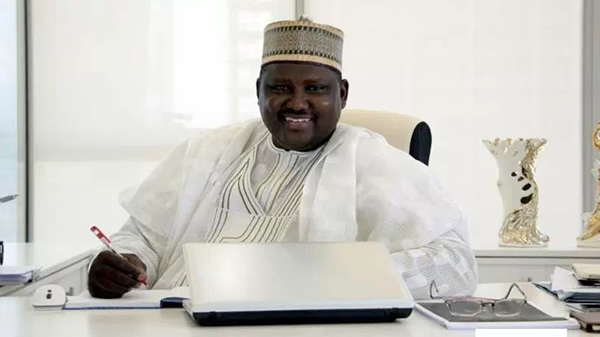 A Federal High Court sitting in Abuja, on Friday, ordered the closure of the case of Abdulrasheed Maina, Chairman of defunct Pension Reformed Task Team.

Justice Okon Abang, who gave the order, also fixed October 4 for parties in the case to adopt their final written addresses.

After the adoption of a final written address, a case is fixed for a judgment, the News Agency of Nigeria reports.

Maina (1st defendant), who was arraigned before Justice Abang on October 25, 2019, by the EFCC alongside his firm, Common Input Property and Investment Ltd (2nd defendant), pleaded not guilty to the 12-count charge bordering on money laundering to the tune of N2 billion.

He was then ordered to be remanded in Kuje Correctional Center.

Justice Abang had, on January 28, 2019, varied Miana’s bail conditions, following his inability to meet the bail terms granted him on November 26, 2019, eight months after.

Abang reduced Maina’s bail condition from N1 billion to N500 million with a surety in the like sum who must be a serving senator as opposed to the earlier order of producing two serving senators, among others.

However, Maina was unable to get a senator as surety for his release until Sen. Ali Ndume, who represents Borno South, decided to stand in.

Maina subsequently jumped bail and was said to have fled to the Republic of Niger around September 2020.

The court, on November 18, 2020, revoked his bail, ordered his arrest anywhere he was found.

The court also ordered his trial to continue in absentia.

His surety, Ndume, was remanded in Kuje Prison for about five days before Maina’s rearrest.

Maina, who was produced in court on December 4, 2020, was ordered to be remanded in prison custody pending the hearing and final determination of his matter.

When the EFCC closed the case, on December 9, 2020, after calling nine witnesses, Maina was ordered to open his defence.

Although Maina had applied for a no-case submission, the court, on December 21, 2020, foreclosed his right to make such an application on the grounds that the ex-pension boss had had adequate time and facility to make the submission but failed to do so.

Maina, who had only called two witnesses in his defence, had, on March 8, applied for a subpoena compelling the Attorney General of the Federation (AGF), Abubakar Malami; the Central Bank of Nigeria Governor, Godwin Emefiele; former acting Chairman of EFCC, Ibrahim Magu, among others, to appear in court and testify in the ongoing case against him.

Besides, his first defence witness, Ngozika Ihuoma, while giving his evidence-in-chief, alleged that EFCC under Magu misappropriated 222 property worth N1.63 trillion recovered by the Maina-led PRTT.

He alleged that Magu had sold most of the property to his friends and associates.

Maina had only called the second witness, who was still on examination before the court ordered that his case be closed.

Earlier when the matter was called, an officer of the Nigerian Correctional Service (NCS), Kuje, Emmanuel Orlu, told the court that though Maina was not in court, the ex-pension reformed boss was in their vehicle outside the courtroom.

Justice Abang had asked the officer why the defendant (Maina) was not produced in court.

The judge directed the court registrar to pass a paper to the prison officer to write his name.

“My lord, the defendant is in the car outside. He has problem with the both knees,” Orlu said.

The officer, who acknowledged the receipt of the hearing notice, prayed the court if his colleague, who is medical personnel could speak on his behalf but the judge refused.

The judge then recorded that Maina was absent in court, warning that the proceeding is always in court and not outside the courtroom
Maina’s Counsel, Abel Adaji, prayed the court for a short adjournment.

Adaji hinged his application on the claim that he was not served with the hearing notice in time.

“We were just served the hearing notice today. Our witness is not even within jurisdiction,

“We are humbly appealing for a very short date,” he had said.

The judge, then, asked him how he got to know about the matter.

“My lord, my learned brother, Anayo Adibe (who is also Maina lawyer) informed me this morning that the matter is slated for continuation of hearing this morning.

“And I did not make enquiry as to how he got the information,” he told the court.

But Counsel to the EFCC, Mohammed Abubakar, opposed the application for adjournment.

“Despite the fact that hearing notice was not served on the defence formally according to counsel, the presence and announcement of appearance by learner counsel for the defendant is an admission against interest.

“This is particularly considering the fact that my lord is on fiat and no longer reside in Abuja as this court is presently constituted.

“Therefore, effort should be made to maximize the advantage presence of the court by making meaningful progress in the proceeding in the spirit of ACJA 2015.

He also argued that the notice of hearing served on the Correctional Service was an order of the court that must be complied with to produce Maina in court.

“It is a violation of the order of the court for Prison Service not to have produced him in court,” he said.

Abubakar also reminded that the order of the court that proceeding should continue in Maina’s absence is still subsisting.

“Therefore, while I condemn the failure of the prison authorities to produce the defendant in court, I still submit that the matter can proceed in his absence,” he insisted.

Abang, who acknowledged that the Chief Judge, Justice John Tsoho, issued him a fiat to conclude the matter on July 12, recalled that he directed that hearing notices be issued to parties and the correctional service authorities on July 13.

He said there was no medical certificate to back why Maina was not in court.

“Even if there is any certificate, it is only persuasive and not binding on the court based on the Supreme Court decision.

“The officer said he is aware and that it is his own fault that the defendant is not in court today,” he said.

The judge then refused to grant the application by Adaji.

NAN, however, confirmed that Mr Maina was sitting at the back seat of the Hilux Van of the correctional service parked at the premises of the court.

When the matter was called after it was stood down as requested by the EFCC lawyer, Adaji told the court that Maina’s second defence witness (DW2) was not in court.

Abubakar then applied that the court should foreclose the evidence of the DW2 and that his earlier evidence given on March 11 should be expunged from court record since the prosecution would not have the opportunity to cross-examine him, citing Al-Mustapha case against the state.

Abang, who granted Abubakar’s prayer, said his argument was credible and unchallenged.

“Maybe it is a legal strategy but let see how this will work in his favour,” he said.

The judge, who ordered that the evidence of the DW2 be expunged from the court record, directed Adaji to call the next witness.

“We have no witness in court considering the fact that the counsel was not served the hearing notice of today’s proceeding,” Adaji responded.

Abubakar, however, argued that the presence and announcement of appearance by Adaji was evidence that he was aware of the day’s sitting.

He further argued that since Adaji had no other witness in court and without making any further application, “I urge the court to close the defence of both the 1st and 2nd defendants and adjourned the matter for the adoption of final written addresses.”

When the judge asked Adaji to respond to Abubakar’s submission, he said: “We have no response.”

Delivering the ruling, Abang noted that “where no excuse is offered, no indulgence should be granted. That is what the Supreme Court said.”

He described the action of Maina’s lawyer” as a delay tactic to further frustrate the matter which was filed since 2019.”

He said since Maina had been given the opportunity to be heard and he failed to do so, he should have himself to be blame.

“I have no option than to close the case of the 1st and 2nd defendants in this matter.

“I hereby close the case of the 1st and 2nd defendants. The parties should therefore file and serve their final written addresses within 21 days,” he ruled.

He adjourned the matter until Oct. 4 for adoption of final written addresses.