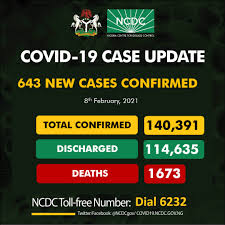 The Nigeria Centre for Disease Control (NCDC) has reported 643 new cases of coronavirus COVID-19, bringing the total number of infected people in the country to 140,391.

The NCDC disclosed this on its official Twitter handle on Monday.

It was reported that the country continues to record a trend of steadily declining active cases, for the second day after the active cases dropped below 1,000 marks for the third time since January.

The first lowest daily count was on Jan. 2, 2021, when 576 people were confirmed positive with the virus and the second-lowest this year was Feb. 7 when NCDC registered 506 infections.

The public health agency also announced additional six COVID-19 related deaths on Monday along with the 643 new infections which occurred in 18 states and the Federal Capital Territory (FCT).

The NCDC stated that Oyo, Lagos and Rivers recorded the highest number of COVID-19 infections on Monday, with 88, 86 and 55 cases respectively.

The NCDC pointed out that 1,110 people were discharged from isolation centres across the country after testing negative to the virus.

“Our discharges today include 744 community recoveries in Lagos State, 100 in Rivers, 78 in Plateau, 72 in Kaduna State and two in Benue, all managed in line with guidelines,” it added.

The country has also sadly lost 1, 647 people while 112,557 people have been successfully treated and discharged.

Nigeria, in its response strategy, still focuses on four pillars which include infection mitigation with stricter implementation of public health measures, upgrading and refining therapeutics, vaccines, which have become a central global topic, and maintenance of routine and essential health and hospital services such as antenatal care.