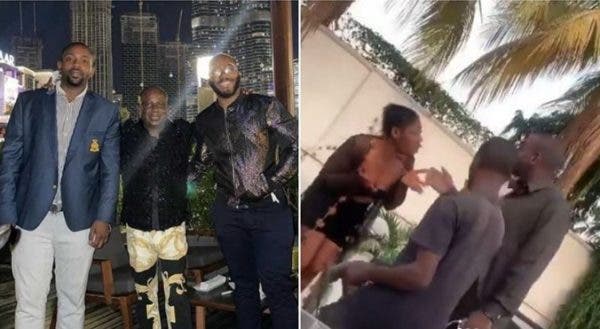 The younger brother of former Big Brother Naija housemate, Kiddwaya has been accused of sleeping with a commercial sex worker whom he allegedly refused to pay after the session.

The revelation was made by controversial Instagram blogger, Gist lover who shared a viral video capturing the moment the lady was creating a scene and shouting at Kiddwaya’s brother.

”Baba terry one of your pikin don knack olosho no wan pay o… them even wound the holosho girl,see blood everywhere, Terry tell your pikin to pay this girl, Abi you wannna see crazy? Ofeee ri weyrey…I come in peace”

Reacting to the video, some social media users made jest of Kidd’s brother while others dragged the billionaire’s son for bringing shame to his family.

Not that he doesn’t have the money to pay o, now he has brought national shame to the family. Something weh him for pay clean mouth now see

So billionaire pikin no get money to pay olosho

This is wickedness na is not fair, when no be the say the money no Dey, e no easy before person carry him body down make u Dey bang am anyhow, at the end of the day u no pay……… just once for ashawo oooo

miss_cindy_not_cinderella:
Why patronize someone and not pay? And na millionaire oh