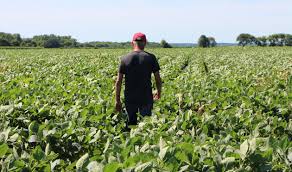 Chukwuka told the Newsmen in Lagos that due to the effects of climate change on weather conditions, it was not advisable for local farmers to depend on seasonal rains to cultivate crops.

“There are so many advantages for local farmers, who do not depend on a rain-fed agricultural system in present times.

“In the past, farmers could determine the rainy season from the dry season and they know the best times to plant their crops.

“However, in present times, the rainy season is not easily determined due to climate change effects.

“In those days, we could depend on the rains and the farmers know what periods to operate and cultivate our crops, but now it is not so.

“This year, lots of farmers planted when the rain started, but suddenly the rain ceased, which has caused them to make so many losses, because the plants could not survive,” Chukwuka said.

He urged them to adopt irrigation practices, saying that this would enable them to cultivate and produce crops all year round, irrespective of the season or weather conditions.

“With a good irrigation system, farmers will never be taken unawares, but will always be sure that the crops will do well, whether there is rain or not,” the farmer told Newsmen.

Chukwuka said that full dependence on rain-fed agriculture had made a lot of local farmers to suffer losses on the crops and also resulted in increased prices of food products.

According to him, farmers who do not depend on rainfall alone break even in comparison to those who depend solely on a rain-fed agriculture system.

He said: “The flip side of a rain-dependent agriculture system is that the price of food items and products have gone up.

“For example, the prices of Ugwu and Okra crashed at the start of the rains, but now, their prices have gone up again, because most farmers that depended on rain could no longer produce and lost their crops.”

According to Chukwuka, farmers that do not depend on the rain are making more profits, though, they spent extra money to irrigate their farms, the extra margin they make justifies their expenses.

“The farmer does not necessarily need to set up a greenhouse farm to have a good irrigation system. If you are a full-time farmer, you will need irrigation to remain in business.

“The farmer faces a lot of disadvantages when he does not have a good irrigation system to cultivate crops,” he said.

The greenhouse farmer said a major factor in crop farming was access to water, adding that in advanced climes, crops were cultivated all the year-round.

Chukwuka added that all year round farming was only possible with good irrigation in place.