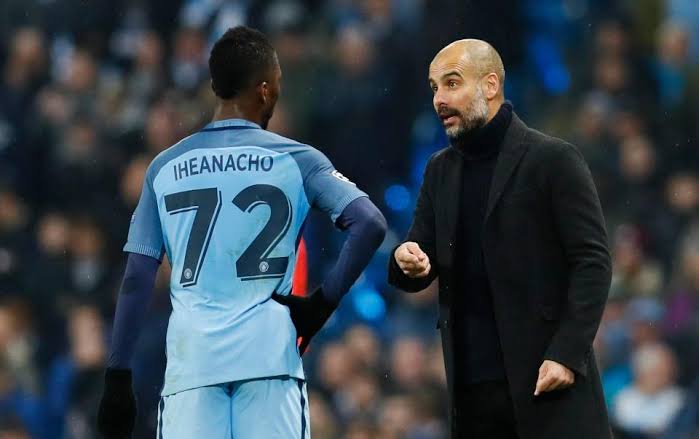 Manchester City manager, Pep Guardiola has revealed the reason that he allowed Kelechi Iheanacho to exit the club.

The Nigeria International joined City in 2015 but left the club for Leicester City in August 2017 after falling behind the pecking order to Sergio Aguero and Gabriel Jesus.

Speaking ahead of a reunion at the King Power Stadium on Saturday as City face Leicester, Guardiola said he is glad to see Iheanacho performing so well.

“Incredible,” Guardiola replied when asked what he thought of his former striker’s recent performances.

“The quality was there, he was a young player here and I believe in that moment with Gabriel and Sergio we didn’t have much space. He is a fantastic person, we had a good relationship, and I’m delighted it’s going well lately.

“He’s playing for the injured Maddison and he links really well with the midfield and he’s good in behind, he’s fast and in the final third he has the right tempo, he is so clear in front of the goal.”

Iheanacho was crowned the Premier League Player of the Month for March on Friday after an outstanding performance that saw him.net five goals including a hat-trick against relegation threatened Sheffield United.

MORE READING!  Rashford in, Martial likely out till next season as Man United face Granada in Europa

He beat the likes of Tottenham’s Harry Kane, Manchester United’s Luke Shaw and Manchester City’s Riyad Mahrez to the award, his first in the league.