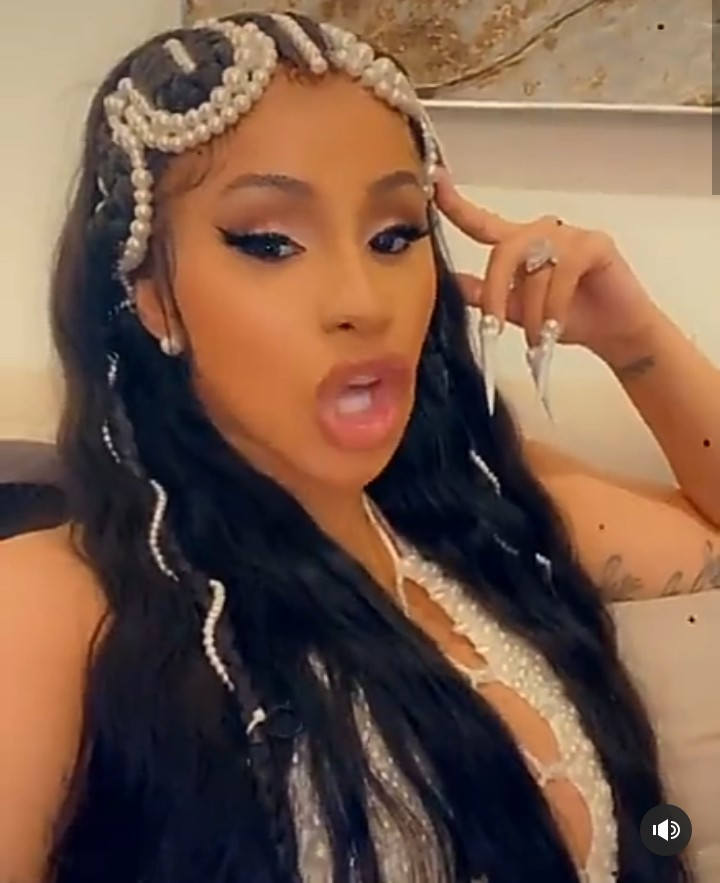 Multiple award-winning rapper, Cardi B, has reacted to a viral video shared by the gubernatorial aspirant for the state of California, Erroll Webbe, accusing her of double standard.

In the video, she was seen preventing her daughter from listening to the hit track, WAP, only to perform the same song at the Grammys knowing full well that there’s a possibility other children are watching.

Cardi B’s sexually charged Grammy performance with Megan Thee Stallion has been a subject of conversation for days now and even led to a tweet fight between her and American political commentator, Candace Owens.

During their performance, Cardi and Meghan seemed to simulate a lesbian sexual move known as scissoring. This didn’t go down well with some people who pointed out that children watch the Grammys.

Calling her out, Republican Party’s candidate for election for Governor of California, Erroll Webber, shared an old video of Cardi pausing her song WAP when her daughter came into the room.

He captioned the video:

“Cardi B cuts off WAP when her daughter, Kulture, walks into the room. She looks embarrassed. This is how you know Cardi B knows right from wrong, yet STILL deliberately chooses to do wrong by girating and scissoring her WAP on national TV… in view of other people’s kids.”

“The Grammies are PG. That means parental guidance. Meaning is your job like it is to mine to my child to monitor what they watch. My performance was around 10 pm on a Sunday Your child should be in bed ready for school the next day why are they up watching Wap?”

Cardi also retweeted a tweet defending her that reads:

“See how easy it is to turn off inappropriate music in front of ur kids instead of complaining and keeping it on.”