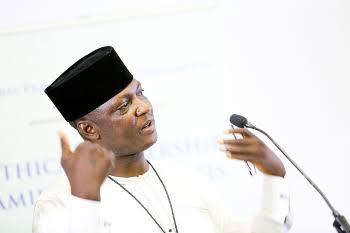 There was pandemonium on Sunday at the Living Faith Church, also known as ‘Winners Chapel’, Sabon Tasha, Chikun Local Government Area in Kaduna State as a suspected suicide bomber was apprehended by officials of the church.

It was gathered that the lone bomber had even gained access into the church when the Close Circuit Camera of the church picked him.

Meanwhile, the Christian Association of Nigeria in Kaduna State, has condemned the incident.

The CAN Chairman in the state, Rev. Joseph Hayab said the association got the report of the suicide bomber mission to the Winners Chapel and noted that it was unacceptable.

The Chief Security officer of the church, Mr. Ekpeyong Edet said the suspect was monitored via CCTV and was promptly accosted by the security operatives on ground.

According to him, the suspect successfully gained access into the church sanctuary and upon searching the bag he was carrying an explosive device.

The suspect, it was learnt had been handed over to the police at the Sabon Tasha Divisional Police Station.

Security has been beefed around Living Faith Church in the State.

At the Faith Avenue, Barnawa of the church, towards the end of the second service when the news of the suicide bomber filtered in, truck load of security operatives were seen in front of the main entrance into the church.

Security officials as well as the Surveillance unit of the church were spotted frisking worshippers into the church.

They also, stopped and searched vehicles going into the church.

Condemning the action of the suicide bomber, the CAN leader noted that three -day fasting and prayers embarked by the CAN leadership, was already working.

Hayab noted that the association got wind of the bomb scare but deliberately hoarded the information from the congregants.

He added that incident was clearly showed that the church was the target.

Hayab said, “we don’t know what the intention of the suicide bomber was. Probably if they interrogated him, they will get better information.

“But one of the reasons was probably to scare us(church of God). Probably, he didn’t get the address of where we are meeting(prayer and fasting crusade). Let them tell us whether we are telling lies.

“We heard about it. We received  messages about it but we didn’t want to scare our members.

“We have taken security measures to protect our members in this place. I got this information at about 12:20pm that somebody was caught with a bomb at the Living Faith Church, Sank Tasha and I felt it was almost 1:00pm for our program

“But why carry bomb to the church? When we said they are attacking churches,  you said no, why carrying bomb into the church.

Meanwhile, a call and message sent to the Kaduna State Police Command Public Relations Officer, DSP Yakubu Sabo for confirmation of the incident, was not returned as of the time of its if filing the report.

Killings:CAN warns against another civil war