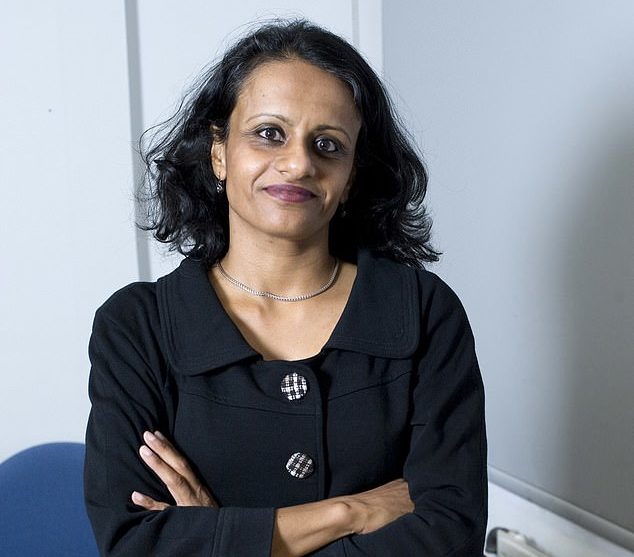 A Cambridge academic, Professor Priyamvada Gopal, who compared the black author of a race report to Nazi has now criticized the royals for not talking about the Crown’s ‘ties’ to slavery.

Gopal added that the Royal Family was a ‘white’ institution that had profited from the British Empire.

The professor of Postcolonial Studies at Churchill College caused an uproar last week when she compared Dr Tony Sewell – who oversaw the Commission on Race and Ethnic Disparities – to Adolf Hitler’s propaganda chief Joseph Goebbels.

Gopal was also questioned about having ‘liked’ a tweet which claimed Prince Philip was the royal who the Duchess of Sussex claimed, in her Oprah Winfrey interview, had talked of ‘how dark Archie’s skin might be’

Her latest provocative intervention came when she was asked about having called the monarchy a ‘white supremacist organisation’ in the past.

It was ‘an institution invested in whiteness … and where whites dominate,’ replied Dr Gopal. ‘The monarchy is deeply implicated in the project of empire; a lot of what it possesses came right out of the imperial project.

‘This is not a monarchy that has ever talked about its ties to the empire – or to slavery for that matter. I am not going to apologize [for saying that],’ she said.

Gopal was also questioned about having ‘liked’ a tweet which claimed Prince Philip was the royal who the Duchess of Sussex claimed, in her Oprah Winfrey interview, had talked of ‘how dark Archie’s skin might be’.

She declined to say sorry for endorsing the tweet on the grounds that Prince Philip had made many ‘racial slurs’ over the years.

Nor did she regret the timing of her response to the tweet, made when the 99-year-old duke was in hospital.

Winfrey has said the alleged comment did not come from the Queen or the Duke of Edinburgh.

The professor also claimed: ‘The monarchy couldn’t even handle a light-skinned beautiful woman. She was the wife of a prince… and was drummed out of this country by the media.’

Defiant Gopal said Dr Sewell’s race report was ‘rigged’ and ‘reads like a propaganda document.’ She stood by her comment, comparing him to Dr Goebbels. After finding out Dr Sewell had a PhD, she wrote on Twitter last week: ‘Even Dr Goebbels had a research PhD.’

She also defended having criticized fellow Cambridge academics who supported Dr Sewell, saying: ‘Cambridge has a long history of denying its own institutional racism.’

When Gopal first spoke out against Dr Sewell the university said it ‘profoundly disagreed’ with her comments but supported staff expressing their views.