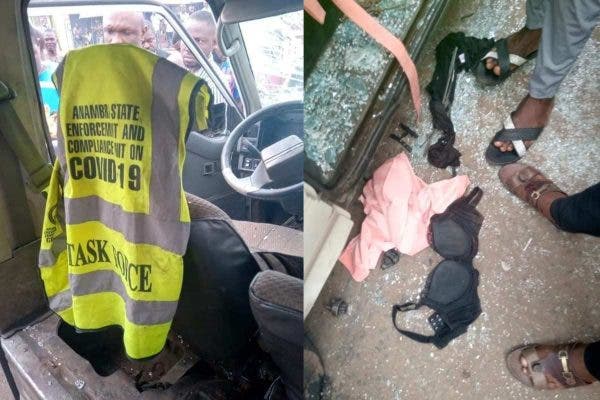 Some Covid-19 task force officials were recently apprehended in Anambra state while allegedly raping a girl for not wearing a face mask.

According to social media reports, the task force officials were nabbed while allegedly sexually molesting a girl they accused of flouting the Covid-19 protocol.

The task force officials were accused of taking advantage of the girl in their vehicle at Nkpor community of the state. The incident which attracted the attention of some residents of the community led to the destruction of some parts of their vehicle.

The information was shared on Facebook by, Chinedu Saint Bede Onwuka who wrote;

“Suspected members of Anambra covid-19 task force were caught molesting and a having carnal knowledge of a young girl inside their vehicle at Nkpor – whom they claimed flouted the law mandating the wear of Facemask in the State.”

Recall that, a 32-year-old widow in Rivers state alleged that policemen attached to the Sakpenwa Police Division, Tai Local Government Area, arrested her on Tuesday, July 28, for not wearing a face mask, then took her to a guest house where one of them raped her at gunpoint.

“I was returning from Bori to Port Harcourt when I met some police officers at a checkpoint. They arrested me for not wearing nose mask. They kept me long there with them.

“Thereafter they carried me from one place to the other, claiming they want to take me to the police station but never took me to any police station.

“After some time, they took me to a guest house where one of them raped me till dawn. His name is Inspector Peter Iba of Sakpenwa Police Station.”