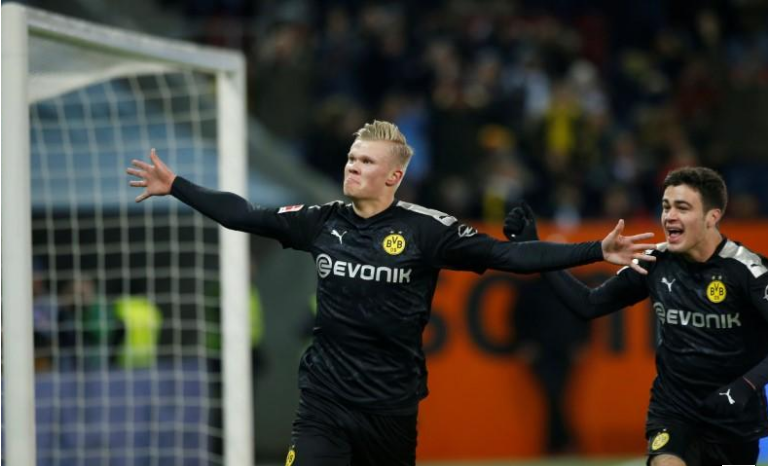 Borussia Dortmund’s new signing Erling Haaland scored a sensational hat-trick in 23 minutes on his debut to help his team come from two goals down and beat Augsburg 5-3 on Saturday as the Bundesliga resumed after the winter break.

Norwegian teenager Haaland, who joined only weeks ago from Red Bull Salzburg for a reported 20 million euros (£17.04 million), scored his first goal with a low drive in the 59th, three minutes after coming on to cut the gap to 3-2.

Augsburg had led 2-0 and 3-1 through a brace from Florian Niederlechner and a goal from Marco Richter after Dortmund had squandered plenty of scoring chances in the first half. Julian Brandt had briefly cut the deficit for Dortmund.

Jadon Sancho drew the hosts level in the 61st and Haaland then tapped in Dortmund’s fourth in the 70th to put them ahead.

The 19-year-old talent sealed their win to live up to heightened expectations and completed his memorable hat-trick in the 79th minute to put fourth-placed Dortmund on 33 points.

Haaland had shot to fame earlier this season when he scored 16 league goals in Austria and eight goals in the Champions League group stages before his move to Germany.

He had also been linked with a number of top European clubs after Salzburg failed to qualify for the knockout stages of the Champions League, with Premier League side Manchester United and Serie A champions Juventus reported to be interested.

Leaders RB Leipzig, on 37, host Union Berlin later on Saturday. Bayern Munich, third on 33, travel to Hertha Berlin on Sunday. Borussia Moenchengladbach are second on 35 after Friday’s 2-0 loss at Schalke 04.