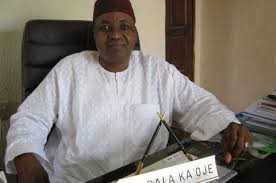 President Muhammadu Buhari has extended heartfelt condolences to the Ka’oje family, the government and people of Kebbi State on the passing of Bala Ka’oje,  the former Minister of Youth and Sports Development.

The president made his feelings known in a condolence message released by his Senior Special Assistant on Media and Publicity, Malam Garba Shehu, in Abuja on Wednesday.

Buhari stated that as a former member of the House of Representatives, community leader and APC stalwart, Ka’oje believed deeply in rendering selfless service to the people.

According to him, the deceased will be greatly missed for his passionate disposition to others.

The president prayed for the eternal repose of the soul of the departed and divine comfort for family, friends and associates.

Late Ka’oje, aged 60, who died on Jan. 19, was minister of sports during the defunct Obasanjo administration.