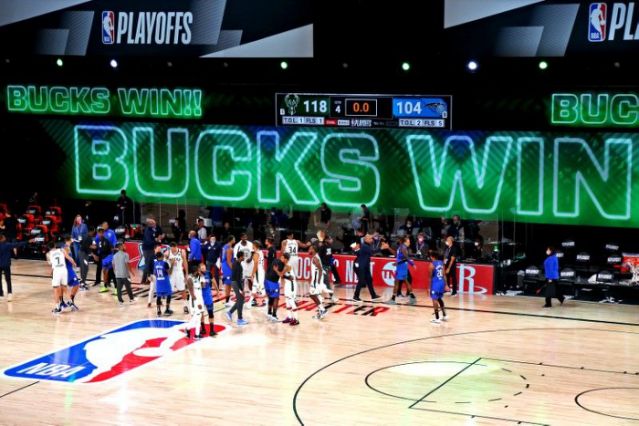 This was in their Eastern Conference first-round playoff series at the ESPN Wide World of Sports Complex near Orlando.

Three days after walking out to protest the recent shooting of Jacob Blake in Kenosha, Wis., the Bucks led by as many as 21 points in coasting to a fourth straight win.

This vaulted the top seed into an Eastern semifinal matchup with the fifth-seeded Miami Heat.

The best-of-seven between the Bucks and Heat tips off Monday night.

Antetokounmpo put up game-highs in points (28) and rebounds (17) in leading the Bucks to their second straight first-round series win after they had been eliminated there in eight consecutive trips to the postseason.

Middleton chipped in with 21 points, 10 rebounds, and a team-high seven assists, as Milwaukee rebounded from a shocking 122-110 loss to its eighth-seeded opponent in Game 1 with four victories by an average of 14.5 points.

The Magic, who had a losing record (33-40) in the regular season, was led by Nikola Vucevic’s 22 points and 15 rebounds.

MORE READING!  I discovered being black was a problem when I got to New Zealand - Israel Adesanya

Milwaukee bolted out to as many as a 10-point lead in the first quarter and a 17-point advantage in the second period.

But Marvin Williams countered with a three of his own for the Bucks to double the margin, and Milwaukee never led again by fewer than six.

Antetokounmpo and Middleton bombed in three 3-pointers apiece, and Williams connected on four in five attempts to account for all 12 of his points off the bench.

Brook Lopez added 16 points, George Hill 11 and Eric Bledsoe 10 for the Bucks, who lost two straight in the regular season to Miami before beating the Heat 130-116 earlier this month after the restart.

Fournier finished with 18 points, D.J. Augustin 15, Markelle Fultz 14 and Terrence Ross 13 for the Magic, who bowed out of the playoffs in the first round for the fourth consecutive time. (Reuters/NAN)